Home Depot is a pretty fun store, really. I mean, they have so many things, and so many handy things, and lots of very helpful people who sometimes know what they’re doing and sometimes don’t. I spent four hours there yesterday (in two visits), and it was great. I bought:

The plywood… I kinda messed up on the plywood, so here’s hoping it will all be fine. I wanted exterior plywood, because that’s what my research said to use, but then the plywood at Home Depot wasn’t very well labeled, and the helpful man in the hardwood section said that all plywood could be used outside as long as you seal it, and that I didn’t need the ugly green pressure-treated plywood and I shouldn’t use that anyway if people were going to be touching the end result.
So I bought a sheet of pretty plywood, 1/2″ thick, sanded on both sides, 5-ply laid crossways as usual, and it looks like white pine so there’s that. But then I read up on the brand (Sandeply by Endesa) later and learned that it’s interior-grade plywood, which means the glue that holds the plys together isn’t rated for outdoor conditions. Also it’s not white pine or anything similar, but a mix of tropical hardwoods. It’s made in Ecuador. Their website talks a lot about how great they are and how much they care about the environment and sustainable forestry, but it’s their website so who knows. So yeah, the wood isn’t ideal. But it’s very pretty, and I got it all cut up (except for the roof bits, because Home Depot apparently can’t cut angles), and I took it home and sanded it all up nicely and got it ready for sealing.
I also deeply confused the guy in the paint section. First I brought him a can of exterior sealant and asked a ton of questions about it (that started with “it says ‘transparent’ but it comes in ‘natural’ ‘cherry’ and ‘oak’ — so is it transparent, or not?”). Then I started asking about the ‘Venetian Plaster’ line of the Martha Stewart line, and when I learned that didn’t come in white, I wanted to know what color authentic limestone plaster was, and what I should buy that would have both that color and that effect… he wanted to know if I needed interior paint or exterior paint, and I responded with something like “well, it will be inside, but inside a little structure that will be outside, but it should be weatherproof, but it won’t be heated, and it might get hot sometimes, and also it can’t be shiny because it has to look like plaster but also there will be books, so it can’t rub off easily…” He didn’t really know what to do with me.
Then I was told later that Home Depot didn’t have the screws I needed (exterior grade wood screws but very short), but that there is a screw-specific store in Ballard that I should visit. So this weekend I’m going to an entire store that sells nothing but screws and fasteners. It sounds pretty rad.
Side note: sanding wood makes a lot of sawdust. This might seem obvious, and I knew that sawdust would happen, but I thought that if I laid down a nice big drop-cloth it would be fine, and since I was doing it late at night I didn’t want to be out in the garage, I wanted to be in my living room, working on my project while watching some nice Science Channel educational programming and leaning on my couch. So that’s what I did, and the drop-cloth worked great and all, but then afterward I realized that there is now a fine layer of very fine sawdust all over EVERYTHING in my house. Like, really, everything. Everywhere. So, you know, consider yourself warned, the next time you think that sanding down some plywood in your living room is a good idea, because it’s not.
Also I learned later that some wood, like mahogany, is actually poisonous so you don’t want to breathe in that sawdust. And I think the glue that holds plywood together is also probably almost certainly cancer-causing or something, and probably shouldn’t be inhaled or spread liberally over your entire living space in the form of a fine powder. But, you know, whatever.
End result: beautiful plywood, ready for phase two: sealing! 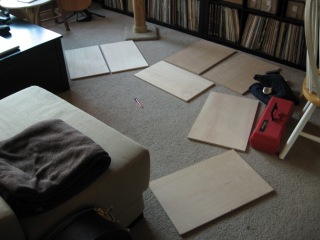 (note the super-pro pencil on the floor)