Oh hello! We take a break from our normally-scheduled Walden Cabin updates to bring you this: Notes from Abroad. It seems a fitting venue, since Thoreau really enjoyed travel writing. Also I didn’t want to start a separate blog, since I’ve clearly done such a good job keeping up with this one. Those who have known my long-term blogging history (I’m looking at you, Michael) know that sporadic updates and brief periods of wild enthusiasm followed by months or years of silence is the norm. Why break with such an established tradition?
A couple notes on Notes from Abroad: I’m writing it on my iPhone, during my down time, or in fits and spurts as I think of or see interesting things over the course of the day, and then uploading it at night when I have that magical combination of free time and free WiFi. So there will be typos, and each post may ramble a bit and be fairly disconnected, because I’ll be writing it here and there, and the iPhone doesn’t really lend itself to high-level proofing and editing. Apologies in advance for all that.
I’m on a plane to Frankfurt now. I’ll have an hour in the airport to catch another flight to Oslo, so there’s a decent chance I’ll miss it, but if all goes well I’ll be in Oslo in just about nine hours. Woo! I’ve watched the pilot episode of a mediocre tv show (I don’t know what it’s called, but there were some chatty superficial 20-something girls in NYC and it wasn’t Girls), and about 3/4 of the new Beautiful Creatures (wasn’t there an older movie with the same title?). I don’t have a whole lot of patience for movies anyway, but I was excited to see Jeremy Irons and then (spoiler alert!) all of a sudden there were witches and special effects and a Wise Older Black Lady who was sort of a post-civil-rights maid and who knew Ye Olde Voodoo because obviously, she was the only mature person of color in a movie set in the South so what else was she going to do? Anyway, I gave up on it. Then I read part of a book and tried to store up some text messages in WhatsApp to send later when I have WiFi, but it can’t do that (sadness!). Soooo then I decided to blog, because somehow we’re only three hours in to a ten hour flight, and a certain kind gentleman (that’s right, I called you a gentleman) gifted me a spare battery for my iPhone so UNLIMITED USAGE AWAITS! Oh, and I ate some airplane chicken so if I die of food poisoning we’ll all know why.
Ok, time to go read more! My seatmate is amazing; she seems nice but she hasn’t tried to engage me in conversation yet so she’s pretty much ideal.
This child seems to wonder if it might be possible to scream all the way from Seattle to Frankfurt… so far the answer appears to be yes. The flight screen says we’ve just reached Greenland and the child’s lungs are still holding out. Impressive…
Update: I’m staring out at the endless expanse of the North Sea. It’s quite lovely from the air, and soon I’ll get to see it in person, with Kj! Related: the stated purpose of my trip is to visit Kj in Scotland, and the last two (of six) letters of my flight confirmation code are KJ. Perfection 🙂
Anyway, I flew right through the nighttime on the map, though because of our northerly arc, the sun only set for a few minutes.
I’ve spent a lot of time thinking about airplanes on this flight. How they drive pretty well on such spindly-looking wheels. How this one is weirdly mini-polka-dotted on the inside, which makes it hard to look at it for too long and makes the curves of the inside of the cabin walls more apparent. How over the years I MUST have ridden in some new-ish aircraft, that MUST have been built after they banned smoking on all planes, and yet I’ve never seen an airplane without little ashtrays built in everywhere. You’d think they’d have phased those out by now…
Ooh, now I’m on the plane to Oslo, which we reached via packed bus from the terminal. I’m saddened to report that the same child of prodigious lung-strength (or possibly one that sounds just like it, at comparable volume, which might be worse) has followed me onto this flight. CREEPY SCREAMING STALKER CHILD! 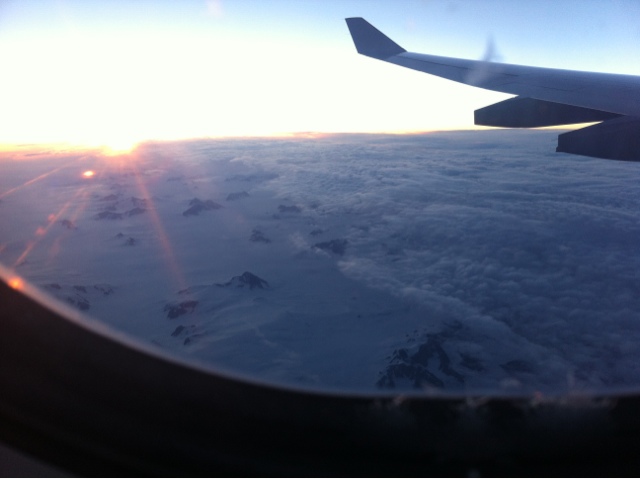 One thought on “Notes from Abroad”