I woke up early in my room at the inn, and spent a little while convincing myself to get out of bed and partake of the included ‘full Scottish breakfast,’ which I eventually talked myself into. I went down to the restaurant adjoining the pub, and had:
Grapefruit (canned, I think)
Orange juice
Tea
Yoghurt
Brown toast with butter and jam (“Yes, I’d love some toast, thank you!” “White toast or brown?”)
Black pudding (a.k.a. blood sausage)
Scrambled eggs
Mushrooms
…it was delicious, aside from the grapefruit. Black pudding is crazy good! Earthy and hearty and warming and so, so tasty. Although according to my Scottish taxi driver later in the day, the type matters — he recommended a specific kind but his accent was thick and I couldn’t quite catch it. If you get the wrong kind, he says it’ll be “fulla fat ‘n gristle” and not as good. You want the nice lean kind. He also recommended white pudding but I couldn’t quite figure out what type of dish that was…
So I ate a nice hearty breakfast, and then walked the 40-ish minutes to the train station. I took a train to Aberdeen and wandered around until I found a nice Scottish cabby (whose dream is to ride a Harley Davidson motorcycle on Route 66), and got a ride to the airport along with some truly lovely conversation. I actually found two taxis at once at the train station taxi stand, but wasn’t sure if they were available so I stood around for a few minutes awkwardly, and then the one in back hopped out and said “Sweetheart, do you need a taxi?” and I said yes and he knocked on the window of the cab in front, so then that driver got out and took my backpack and opened the door for me. He was so kind and pleasant and concerned to know if I’d enjoyed Scotland and if I’d found the people to be very friendly. I told him I had, and he was glad to hear it.
Then I took a tiny little plane to Stavanger, on the west coast of Norway. Once there I took a bus into the center of town and wandered about for awhile, since it was too early to check in to my homestay. I found luggage lockers at the ferry terminal (super expensive) and the train station (still quite expensive), and then remembered an idea I’d had in Paris — I went to a museum nearby that was open until 7pm and took advantage of their very cheap lockers, and dropped off my backpack for the afternoon. Then I walked around the town a couple times to explore, wandered through an old cathedral, read a book by the sea, and had a very nice afternoon.
I also stopped at a deli, on the assumption that it would be cheapish, and had a chai latte and a slice of the most un-cheesecake-like cheesecake I’ve ever encountered. After I ordered my chai latte and paid, there was a fairly long, awkward pause while the ‘barista’ and I stared at each other; then he gently directed me over to the side where there was a giant latte-and-espresso-dispensing machine that I was to use. After some guesswork and pressing a few buttons, it filled my cup with decidedly sub-par chai latte. That and the slice of cheesecake only cost me about $16, though, so cheapish… for Norway.
I picked up my backpack and used my compass to find my way 20-ish minutes out of town to my homestay, and met my hosts. They were absolutely wonderful people and they had the most adorable little kitten! His favorite trick was to scoop a piece of dry food out of his bowl, chase it around the kitchen for five minutes or so, corner it, eat it, and repeat. And he had that awesome unmodulated kitten purr that shakes their whole body. ADORABLE.
After I had settled in and visited with my super-nice hosts for awhile, I ventured back into town to hunt down some dinner. My hosts were concerned, and kept trying to remind me that Norway is very expensive… they offered me some bread but it was my last night out so I wanted a real dinner. I asked about grocery stores but they replied that it was Sunday… I was like “oh, so they close early?” and they explained that it is against the law to trade on Sunday. WHAT.
So I walked into town and found a nice-looking restaurant, planning to splurge a bit on dinner, and sat down in the sidewalk area. The next table over was a lonely older British businessman, who spent most of the evening making calls home… I kept thinking maybe we would chat and bond since I felt that we were kindred spirits, but I didn’t want to initiate a conversation and seem too forward (or give him the wrong idea) so we never did. I still felt that we had a nice, comradely meal together, though. Now THAT’S classic, eh? Seattle reserve meets English reserve: “Oh yeah, I had dinner in Norway with an Englishman — we sat at separate tables and never spoke; it was great.”
Anyway, so I found this decent, mid-range restaurant, sat down, looked at the menu… did some math, looked again, and ordered the cheapest option: a cider and an appetizer plate that was watermelon, olives, goat cheese and a little basil. It was quite good…. but the bill, excluding tip, was $37. Holy shit, Norway is expensive, y’all…
After my meal I went back and settled in for the night, to rest up for my last full day. 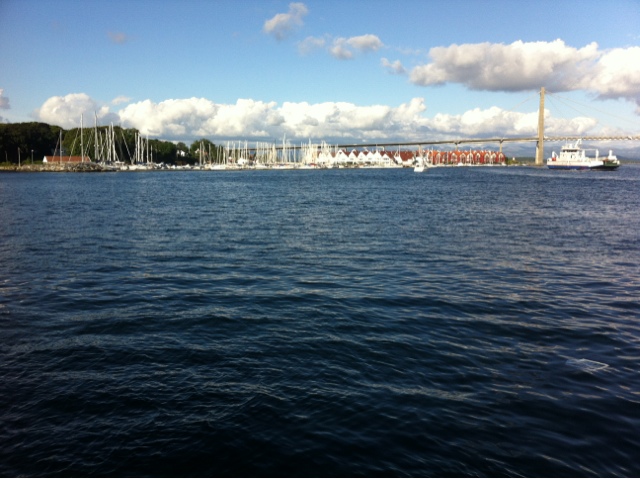