After we left Las Vegas, we drove to our first destination; Valley of Fire State Park in Nevada.

Directions: drive on the main highway for awhile, then turn right. Be directed immediately with no room for argument through a complex obstacle course in a large dirt field, which is doubling as a parking area for an outdoor concert. After telling the various folks directing cars into parking spaces that no, you aren’t going to the show, in fact you want to go to the State Park, thank you very much, you’re directed back through the obstacle course in the other direction, and onto a small, but paved, state road. A half hour or so later, after lots of brown hills and scrub brush, go through a gate and pay the park fee, wondering where the ‘fire’ part comes in and hoping it’s worth the price of admission. Drive about ten more minutes, crest a rise, and find yourself on in a Dali painting set on Mars. The rocks are sculpted into tortured, organic, visceral shapes, and appear to be melting in the desert heat, their bright red intensified by the sun which is low in the sky behind you.

Yep, this was definitely worth the park fee.

You drive through twisting canyons, watching the colors change from red to orange to gold to white and back again, as the shapes shift and change as well. You want to stop every ten feet and take pictures, but you’re in a hurry to get to your designated 45-minute hike before the dire warnings on the park signs (“PARK CLOSES AT SUNSET. ANYONE IN THE PARK AFTER SUNSET IS TRESPASSING!”) go into effect. You reach the parking lot for your hike and tumble out of the car, arguing about the definition of “sunset” for park ranger satisfaction (“the sun technically set *here*, but it’s just because we’re in a hollow… it’s still shining up *there*, does that count? Sure! Hurry!”). Then you slip and slide down a steep creek bed, noticing that sand over sandstone is VERY slippery, pausing to admire the colors and shapes in the rock as you pass.

You reach the bottom, which is a dry riverbed. You squeeze through a narrow slot canyon (the first on the trip, more to come!), your shoulders brushing the walls. On the other side, the sun is just sinking behind the horizon, catching the red of the rocks and the surprising green of a bush.

You continue on, gradually climbing back up, as the colors in the sky slowly shift along with the colors in the rock. Some of the shapes and hollows in the rock are bigger than others; finally you come to an arch, like a cave that’s gone all the way through to the other side. Obviously you crawl inside, like any self-respecting hobbit hiker, and huddle up against the sandstone to admire the sky.

There’s a lot to admire, and the colors get more and more intense the further you go along the trail.

Until finally the sky has become the most astonishing shade of blue; a color you’d expect from the ocean near a tropical island, not from the middle of the desert. You don’t think it can get any bluer, until you turn a corner and find yourself passing between dark red rocks, over dark red earth, that provide the perfect contrast. 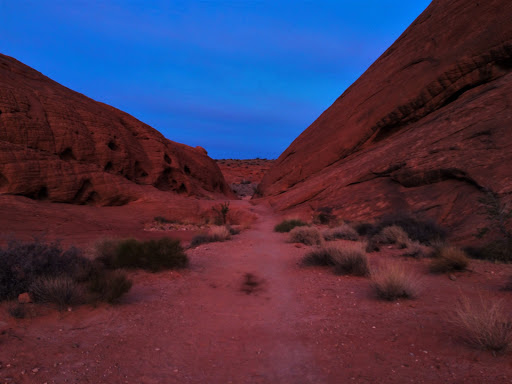 After this it starts to get dark quickly, but luckily you brought a flashlight (always prepared!), and you’re nearly back to the parking lot.

You reach the car and drive slowly out of the park, along winding valley roads, into the gathering darkness. By the time you leave the park it is definitely, absolutely, 100% after sunset — it’s now the kind of dark that only happens in the desert. You drive for miles, and then more miles, eventually back onto the main highway. There’s nothing like driving through the desert at night.

You pass briefly into Arizona (you can tell because the quality of the road surface improves drastically and you have a sudden paranoia about getting pulled over and asked for proof of citizenship), and then into Utah (surprising lack of change, though everything does feel very wholesome and lily-white all of a sudden).

Finally you reach a large town (St George) and check in to your hotel. You’re hungry, and just about everything is closed, so you go for the hotel restaurant. It’s called “Burger Theory” (really?), but you’re willing to forgive that. Everything is going well, or as well as can be expected, and your server is friendly (and possibly still in high school). Then she asks what you’d like to drink, and it all comes crashing down.

After dinner (aside from the water it wasn’t too memorable, which is a good thing) you remember that tonight is supposed to have a meteor shower, so you decide to drive out and find a dark place and look at the sky. After all that dark desert driving, how hard can it be to find dark skies?

Surprisingly hard, as it turns out. You quickly learn something about the residents of Utah: they really like well-lit towns. Streetlights, house lights, lights on signs, lights on warehouses, lights in parking lots….. lots and lots of lights. Very safe. Also very disappointing if you’re trying to see the sky.

You explore most of the industrial area and find a small airport and a nice place where truck drivers park their 18-wheelers for some sleep. It takes much longer than you expect, but finally, almost all the way back to Arizona, you leave the city lights and find a random parking lot in the desert. It turns out that it’s the White Dome Nature Preserve (home of the Dwarf Bear Poppy, unique to the area!). You get out of the car to look for meteors, but after all that effort, it’s cloudy, and there’s no sky to be seen (nor any Dwarf Bear Poppies for that matter, though you’re curious about them now).

Slightly disappointed but also a little relieved to be back in the car, because you’re secretly a bit afraid of the dark, you head back to the hotel to sleep — there’s a long drive ahead tomorrow.