I had an amazing time in Morocco, and I would love to go back someday. I learned a lot, I went surfing and swimming, I got to experience an entirely different culture, and I confirmed for myself that I can live and work pretty much anywhere.

The best thing about Morocco, though, was spending five weeks in a coworking/coliving environment at SunDesk, and making a whole bunch of really amazing new friends. We kept each other company, ate breakfast together every day, brought each other coffee and tea and water, reminded one another to eat and to stop working and to relax, helped each other with projects, went on adventures together, had long philosophical discussions, took group naps in the afternoon, and generally had a lovely time.

Not all of them made it into my pictures (most of which I won’t post here because I failed to ask permission), but I wanted to take a minute to remember them as I move to a new country.

Here’s one group photo of nine of us in a van on the way to Paradise Valley:

And now some little memories.

Katja is a frequent long-time guest, and drove to Morocco from Germany with her dog, Lola. Lola was a lovely little friend to pat when a hug was needed, and Katja is a kind, thoughtful person and a great cook who often shared her dinners with us. This is Lola (who gave explicit permission for me to post her photo by voluntarily sitting on my lap once): 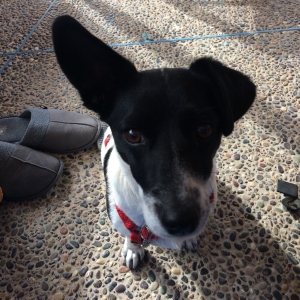 I love her lopsided ears. Katja noted that it’s funny how adorable mismatched ears are on animals as opposed to people: “you would never say the same about a person who had one ear that stuck straight out, would you?”

Misha is from Brasov in Romania, which is coincidentally the first place I traveled by myself outside the US, when I was 18. He worked even later hours than I did and we chatted a few times about Romania. He was pleased that I remembered the Romanian word for “thank you” 🙂

Arif is from Leipzig. We arrived the same day and were next door neighbors for the whole time. He’s a dear, and I helped him write the English translation for an Alexa skill he developed. His childhood friend Tim visited during the last week, and drove us to Essaouira one day. Arif also re-taught me Mühle, or Nine Men’s Morris, after failing to interest Dan from the UK in more than one game, despite using his most persuasive Moroccan street vendor skills:

Melissa and Sebastian are German, and love to surf. She has a great personality and always made me laugh. She told us her favorite phrase to deter pushy street vendors (“no, I already bought some, already-already”) which Arif then took fully to heart and proceeded to use in every conceivable vendor interaction, including with a street musician to our great amusement (“no music, already-already!”). She also re-taught me backgammon and we enjoyed several games. Bastie is a sweetheart and very kindly took several of us beginning surfers under his wing for an impromptu surf lesson. He’s very gentle and soft-spoken, but as soon as we got onto the beach he went full German and we had a very organized, structured surfing lesson, complete with beach drills before we were allowed into the water.

Kasia and Natalia are from Poland, and stayed for two weeks. They joined us for a trip to Paradise Valley, and Kasia went for an extra hour-long hike beyond the highest pools, with me, Dirk, and Meyer. She invited me to visit her in Poland and I’m excited to do so. She was also the designated “drug mule” (because she had a backpack handy) on a late-night mission to buy illegal alcohol from a basement operation in the village, during which she apparently giggled uncontrollably throughout and was therefore banned from any further illicit activities. They tried to buy beer, but there was only one can available, so they also acquired the most expensive bottle of cheap red wine imaginable, which was hidden in the back of a refrigerator.

Tyler (aka “the other American”) is originally from Boise by way of Texas. His friend Meyer (from San Diego via Austin, I think) visited for a couple weeks as well, on his way to South Africa. Tyler was the only other person from our group who went cliff-diving at Paradise Valley, which got us referred to as “the crazy Americans” for the rest of the weekend, which is one of the only times I’ve ever been called an American and not felt ashamed.

Thomas is from Finland, and was my second neighbor for the first couple weeks. His mom came to visit (so sweet!) and they took a road trip around Morocco.

Chrys and Pamina are from Zurich, and they’re one of the sweetest couples I’ve ever met. They were repeat guests. Pamina took pictures of my cliff jump at Paradise Valley, so that I can forever remember what *not* to do next time, and she also joined me, Melissa, and Debbie at the hammam. They left a couple days before I did, but Arif, Tim, Debbie, Tyler and I met them in Essaouira for lunch in a lovely cafe during a torrential downpour.

Dirk is from Holland, and we got along really well. He joined me for a run on the beach one day, and during the cliff-diving adventure he was the person who realized I was in trouble and immediately swam over to make sure I was ok, and kept a close eye on me for several days afterward. I think he wound up in Bali afterward, and I have a feeling I’ll run into him again on the road.

Christian is from Berlin, and it was his second time at SunDesk. He arrived shortly before I left, but we had some lovely conversations and I look forward to meeting him for coffee next time I’m in Berlin.

Debbie is from South Africa via the UK, and became my closest friend at SunDesk. We worked similar hours, arrived a couple days apart, and spent hours chatting. We went for an accidental camel ride, went surfing and swimming in the ocean, went to Paradise Valley and Essaouira, and became quite close. She often brought me a hot cup of tea late at night on the terrace during my 10pm phone calls. We took a long walk on the beach on my last day and she found me my first Portuguese Man O’ War. I’m planning to visit her in Portugal soon!