I decided to spend Easter in Vienna, because a) I had never been to Austria, and b) it’s an inexpensive three-hour train ride from Budapest. Ah, Europe. I love that train travel is normal here. I’m still getting the hang of it, but it’s such a civilized form of transportation.

I booked a hotel, packed an overnight bag, and walked to the train station around 9am on Saturday. I spent the train ride listening to podcasts and making a checklist of all the things I might like to see in Vienna. By 1pm I had dropped my bag at the hotel, and set myself loose in Vienna to see how much of the checklist I could accomplish!

31 March, 2018: I started with lunch at a Viennese coffeeshop, since Viennese coffeeshops are A Thing. The atmosphere was nice (old, ornate, etc), the coffee was disappointing, and for lunch I ordered what the menu listed as “ham cheese bread” which turned out to be a lovely open-face sandwich on tasty bread with butter, ham, cheese, and chives.

Then it was on to the next stop, Tall Thing with History, because I love history and I also love standing on top of tall buildings.

I’ve posted separately about those mysterious tall buildings; for now, let’s skip ahead to the next stop….

….which was the basement bunker of that tall mysterious building; now home to the Torture Museum. It was small and mildly interesting, and there’s an English translation handout available if you ask.

That complete, I went back and checked in to my hotel, and then set out again, this time in search of art. I stumbled across an excellent art exhibition called #DeathToPigs by Ydessa Hendeles, an artist, collector, curator and gallerist. It was one of the best shows I’ve seen in quite a while. My favorite part was walking alone into the “From her wooden sleep” room, which was wonderfully alienating. It was immediately after the “Crypt” room, which featured a wooden artist’s manikin from the 1800’s holding a lit candle, among other things:

Then I did a quick dash through mumok at the end of their day — I managed to see nearly everything, including some Beuys and a famous piece by Spoerri. A highlight was getting to play around in a recreation of an Allan Kaprow happening (and have it all to myself). That was a bucket list item I didn’t expect to ever complete!

I wish I had started at the bottom with the Art into Life! exhibit, as that was definitely the best — I reached it at the end and had to hustle through as they were closing.

Note to self: in Austria, “we close at 19:00” means “you will be walking out the front door absolutely no later than 18:59:59”, which I appreciate, but didn’t fully expect. I should have known better; they do speak German, after all.

Gallery attendant as I arrived at the last exhibit: *looking at her watch and shaking her head* “Nein, wir schließen in fünf Minuten.”

Her, with strong disapproval and shooing me along: “Ach, geh, schnell, schnell! Vier Minuten!”

I found my way back to the hotel and changed for dinner, then took myself out for a delicious meal in the winter garden at Glacis Beisl, which was so lovely that I went back again for lunch on Monday.

On the way back to the hotel I dropped in to a beautiful old church that had recently finished their Easter vigil, so they had just started to turn off the lights but all the candles were lit for that perfect touch of magic.

01 April, 2018: Easter Sunday! I had to work from 3pm-midnight, so I woke up early to maximize my sightseeing time.

I started with a visit to the Esperanto Museum, which was interesting and fun but also very small; there’s not too much you can say about Esperanto, really. It’s run by the same group (the Austrian National Library, naturally) that runs the Globe Museum upstairs, so I thought I’d pop in there real quick too. I wound up staying for over an hour, because it was fascinating!

There were globes from all over the world and throughout the ages — metal ones from ancient times, beautiful ornate ones from the 16th century, more recent ones depicting the moon and Mars, that started showing up after telescopes were invented, clockwork setups to track the motion of the planets, portable ones that opened like round umbrellas and came with a special bellows to blow them up, and so many more. I learned so much about cartography and globes, and I could have easily spent most of a day there. If I ever get wildly rich I would totally start an antique globe collection.

Did you know that for a long time globes were produced in pairs? There would be one globe of the earth, with the usual sea monsters and scrolls etc, and then a companion globe of the heavens (as seen from the outside looking in), with the constellations illustrated. I also didn’t realize how many fairly complex calculations you could do with globes, and I didn’t know about the compasses, hour markers, horizon lines, declination, and so on — all the things that allow you to do those calculations. It was such a great time. The globes were difficult to photograph because they’re all behind glass, but the museum rooms were nice as well: 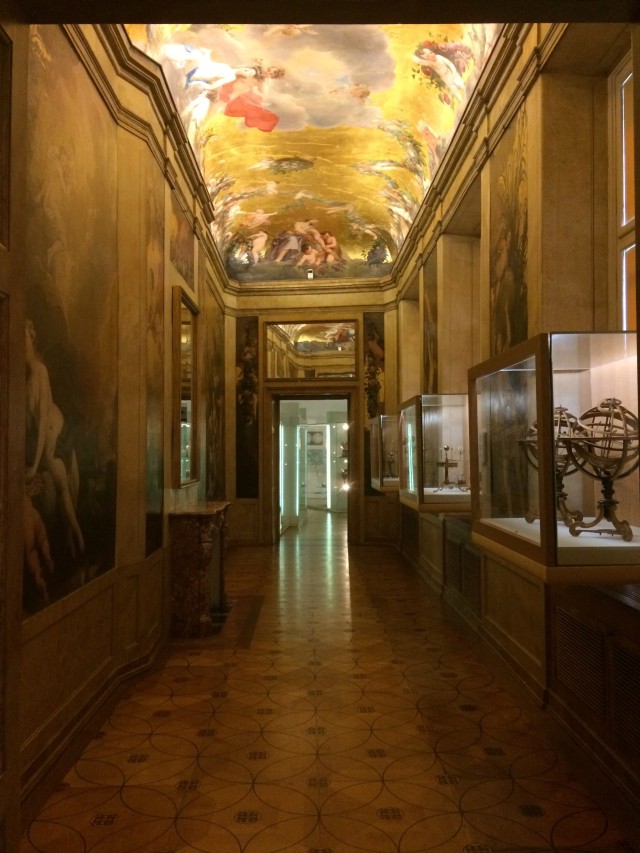 Globetrotting completed, I went looking for lunch. I found an Easter market, but the lines were long, so I went to see a cool old clock instead, and snuck into the back of an Easter mass at the ornate Jesuit church nearby. 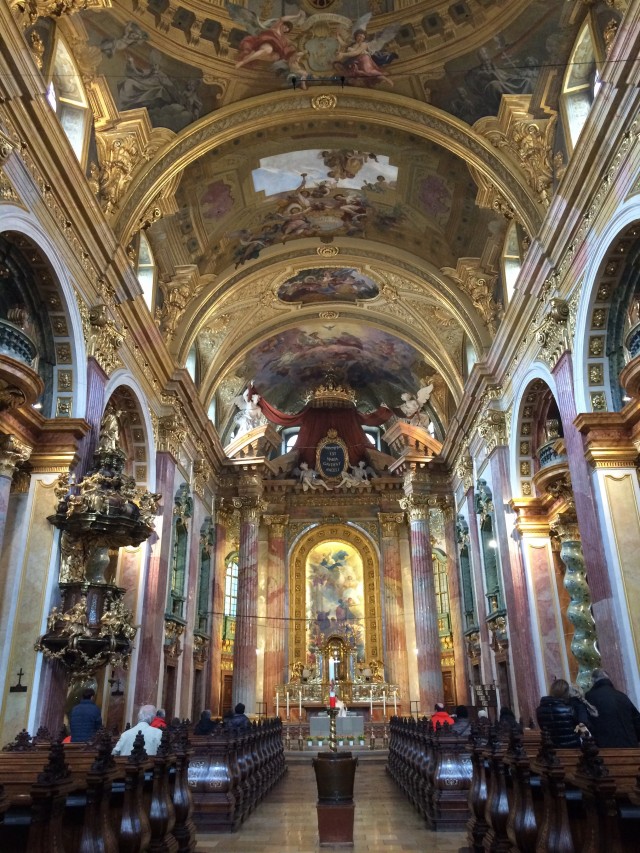 Then I made a quick detour to a different part of the city (by this time I had forgotten about lunch) and attempted to visit Vienna’s Museum of Heating History (because of course I did), but sadly it was closed. Then it was back to the hotel (via a coffeeshop and a cake shop for emergency snacks) to work my evening shift!

Later that evening I realized I had failed to provide myself with adequate snacks for the day, given that I had skipped both breakfast and lunch in favor of sightseeing, so I ventured out to find a quick bite for dinner. After some searching (not much open at 9pm on Easter Sunday) I found a bratwurst stand, which was initially depressing, but once I had my Würst mit Käse in a large fresh baguette, I remembered that sausage is a thing that both Germans and Austrians do very well. It was absolutely delicious.

02 April, 2018: On Monday I checked out of my hotel, leaving my backpack, and decided to spend the day seeing the rest of the flak towers in Vienna, as a way to explore the city. There’s a separate post about that, but I found a few other things along the way!

I had a transit card, so I got to explore more public transit options — most of the subway lines, elevated rail, and trams. I started by taking the subway to Rochusgasse and walking to Arenbergpark, then took the tram back to Landstraße. From there I intended to take the subway to Friedensbrücke and walk across the river to Augarten, but that station turned out to be closed, so I wound up at Spittelau instead. That was for the best, because it meant I got to see Fernwärmewerk Spittelau, a household waste incineration plant designed by artist/architect Friedensreich Hundertwasser. They were closed for Easter Monday so I couldn’t take the tour, but I explored around outside as much as I could. I always love factories and plants and industrial places, and this is a new favorite. 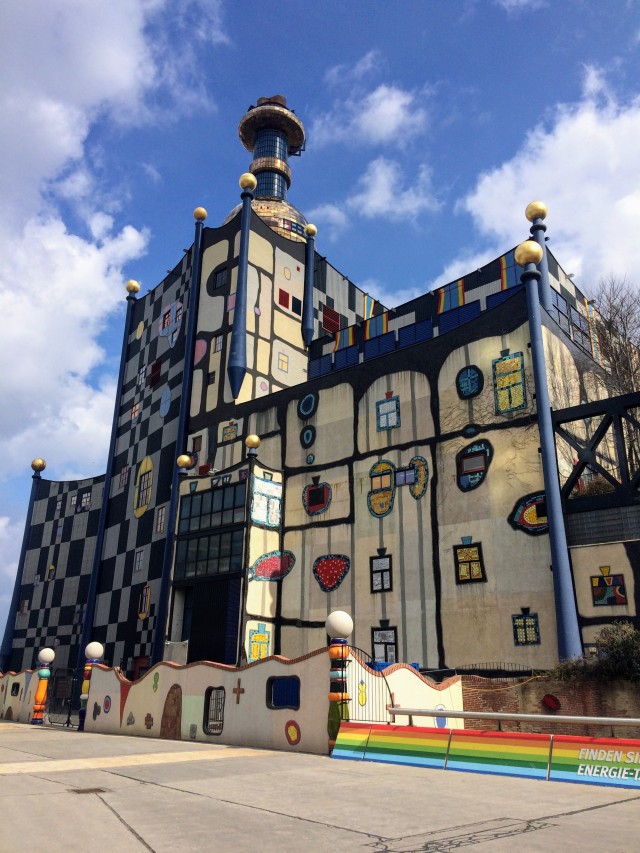 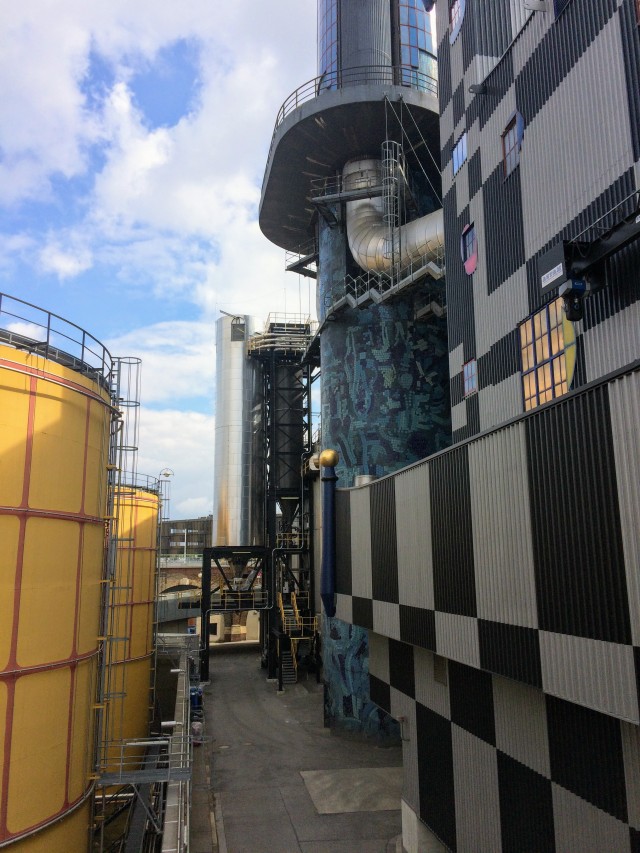 Then I took the elevated train across the river and then hopped on a tram down to Augarten to see the flak towers there.

Then I took the subway back to the museum quarter and visited the Kunsthistorisches Museum, which was huge and had some great exhibits, including some excellent Caravaggio. The architecture of the space was a nice bonus. 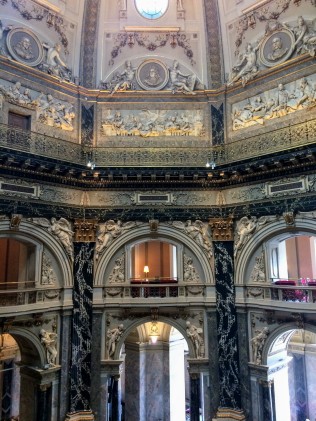 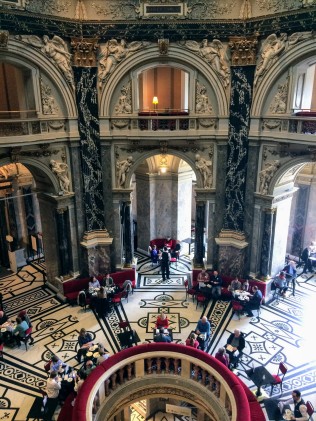 Then it was time for lunch. After that I stopped by the hotel to grab my backpack, took a quick turn through Stephensdom, and made it back to the train station in time to write and mail a couple postcards before catching my train back to Budapest. Happy Easter!