I spent the majority of my time in Albania in Tirana, but I did venture beyond for 10 days or so. I’ve been told repeatedly that southern Albania is where it’s at — pristine beaches, even fewer tourists, etc — but I didn’t make it that direction on this trip. Instead, I spent a day at the beach in Durrës, a week or so in Shkodër, and then a couple days hiking in the Albanian Alps, which will be the subject of a separate post.

17 May, 2018: Durrës is pleasant — a bit busy and touristy, since it’s the closest beach access to Tirana, but a nice little day trip. It takes about half an hour by furgon, which involves getting yourself to the parking lot that the furgons leave from, finding one with a sign for Durrës in the window, and waiting for the driver to decide he has enough passengers to make it worth the trip. We stopped here and there to pick up and drop off locals, and made it to Durrës by mid-morning. We spent a pleasant day at the beach; a nice Caesar salad for lunch, a bit of wading, lots of lounging in the sun, and some walking, followed by a delicious early dinner of pasta and more salad at a fancy restaurant over the water.

Then we headed back to Tirana, which took a bit longer because there were fewer passengers going that direction so our furgon took longer to fill.

25 May, 2018: When I left Tirana, I headed up to Shkodër for a week. Shkodër is popular with tourists mainly as a gateway to either the mountains or Lake Shkodër — it’s not the sort of place you stay for a whole week, and everyone I talked to was slightly shocked to hear I was staying so long. It’s understandable, because there’s not a whole lot happening in Shkodër, but I liked it well enough and enjoyed my time there.

To get there, I took another furgon — this time a little more exciting than the last. When we left, the sliding side door of the van was wide open, as was the driver’s window, so that he could keep shouting our destination out the window at stoplights etc in hopes of attracting more customers (which was surprisingly successful). There’s nothing quite like driving along at 40mph or so with the van door wide open, particularly when seatbelts are generally missing. Once we were leaving the city, the driver’s assistant mercifully closed the door and perched himself on a milk crate in the aisle for the duration of the drive.

I stayed at a little family-run inn off the main square, which had kindly agreed to hold my luggage while I went hiking for a couple days, and which included breakfast. The breakfast was delivered to my room each morning by the kindest house mother imaginable, who didn’t speak a word of English. It always consisted of the following: one huge filled croissant (usually either chocolate or cream), one large glass of milk, and one large glass of cranberry juice. I could never be certain whether I was expected to drink both beverages or choose one, but I didn’t want to appear rude so I got in the habit of drinking my milk, having a couple sips of cranberry juice, and then pouring the rest down the sink before returning the tray.

After a few days I couldn’t bear the thought of another huge sweet croissant at 8am. I don’t usually eat breakfast, nor do I typically eat sweet pastries, and I certainly am not used to combining the two. I was on a consistent morning sugar rush for three days and I didn’t know what to do with myself…. I just kept daydreaming about yogurt, or toast, or eggs, or literally anything else. Again, though, I didn’t want to be rude, and I didn’t quite know how to say no to the croissant across the language barrier without hurting the house mother’s feelings, so on the fourth day I made extensive charades about having a tummy ache when she opened the door with my breakfast. She looked very sympathetic and a little worried, but took the tray back with her. A few minutes later there was a tap on my door and when I opened it, she was there with a bowl of fresh cherries to help me feel better! It was so sweet and kind and also I was so delighted to see fresh fruit that I could have hugged her.

On my first day in Shkodër I had a nice coffee at the revolving rooftop bar in town, because of course there’s one of those. It had quite a lovely view of the town, with the mountains in the distance, and my favorite part — the mosque and church next door to one another. Albania is known for its religious tolerance (probably largely due to the fact that religion was outlawed during communism, so the majority of the population is non-practicing). It’s very nice to hear both the call to prayer and orthodox church bells. I like both! 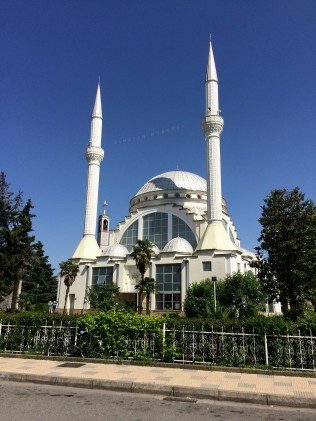 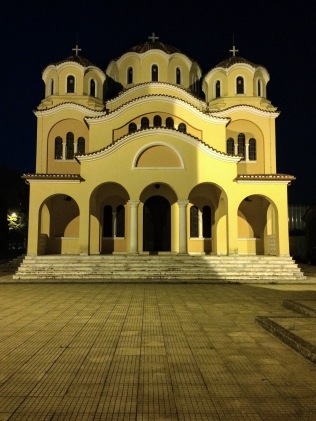 I walked around the town extensively, and enjoyed the statues in the traffic circles, the artwork in the parks, and the lively pedestrian street. I also loved the fact that Albania has entire hedgerows of jasmine, all of which was in bloom while I was there. 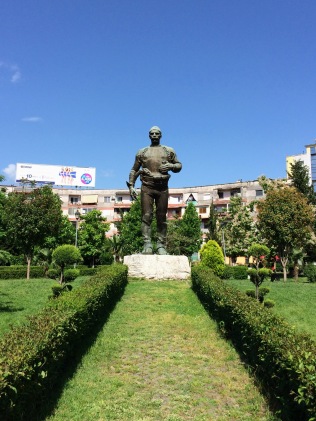 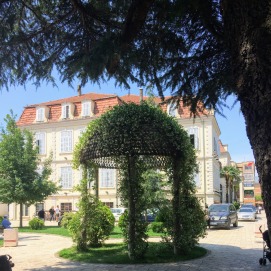 This is all covered in blooming jasmine

There were lots of good restaurants (including one that I went back to at least three times because the steak tartare, Caesar salad, and pasta was fantastic).

I also discovered a few unexpected gems, like a little-known Venetian mask factory on the outskirts of town. It was an unprepossessing building with one car in the parking lot and two ATMs across the street, in an area with zero foot traffic. The door was open so I carefully peeked inside, and since no one was there to either welcome me or turn me away, I wandered around the showroom for a minute, which was quite impressive.

On my first full day off I walked all the way out to Rozafa Castle and back (which, if you plan to do this, I would strongly recommend taking a bus or a taxi instead — it’s a long, hot walk along a busy main road). The castle was very nice: well-preserved ruins with an excellent view over the town and wildflowers galore. I was listening to a podcast during my walk that was talking about rabbit cafes in Japan, so in my head there are also rabbits at Rozafa castle, but I’m fairly sure that’s only in my imagination. 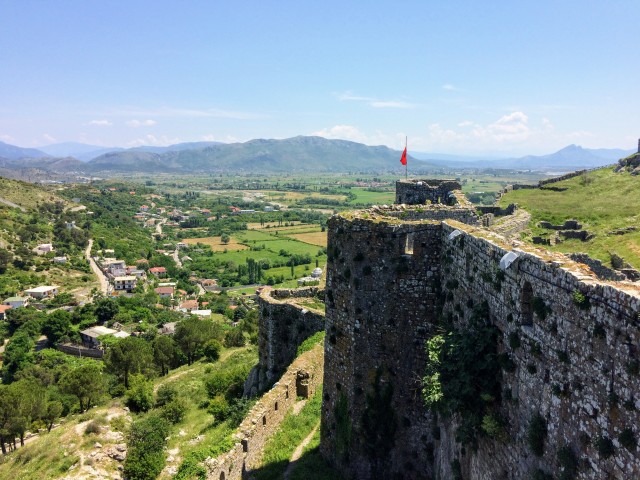 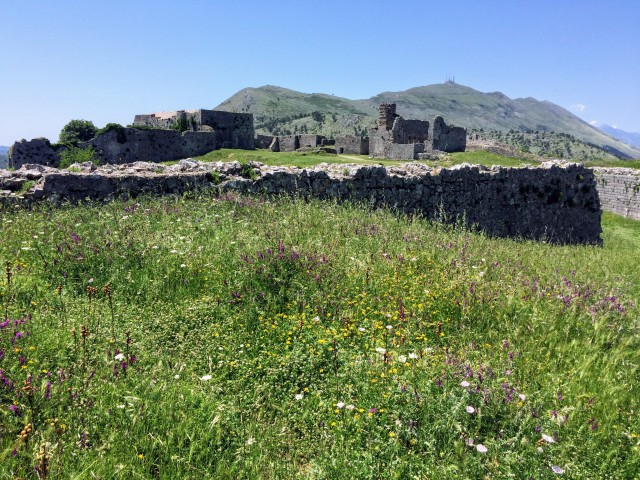 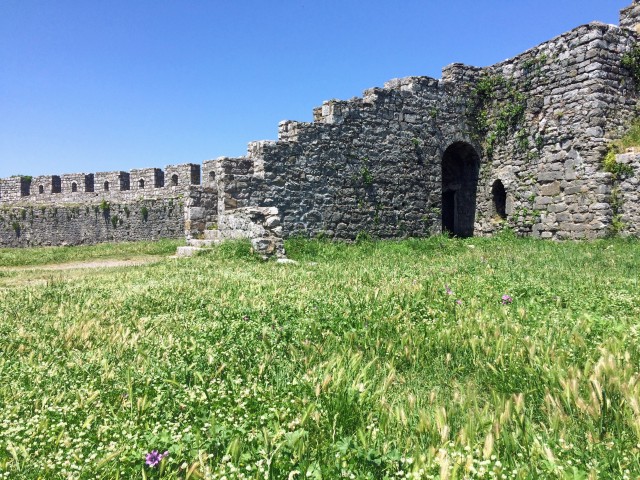 On another free day I took another ill-advised long walk along a busy main road in the opposite direction, to seek out a statue my bus had driven past on my way into Albania. I had really liked it during that fleeting glance, and I had a rough idea where it was, so I decided to go find it on foot. Spoiler alert: it takes a lot longer to get places on foot than it does on a bus: it was not nearly as close to downtown as I expected. Also those infamous Albanian sidewalks petered out frequently along the way, necessitating short quick hikes along the shoulder, or adrenaline-fueled dashes to the other side of the road. It all worked out, though, and I made it there and back in one piece! Along the way I saw a nice cemetery and some lovely cloud formations over the mountains as well. I also passed a number of roadside cafes and construction lots, mostly populated by men on their afternoon break, all looking extremely confused to see a girl trotting along the street all by herself with no conceivable destination.

Despite getting threatened and semi-attacked at by a literal pack of wild dogs while trying to get a good photograph, it was well worth the trip; the statue is a fascinating example of communist art. It’s called the 5 Heroes of Vig, and commemorates a band of five disparate men (mostly of the peasant class) who stood up to fascist invaders with a very heroic last stand.

With my sightseeing well in hand, and once my adventure in the mountains was complete, it was time to catch a bus to Montenegro. I booked a bus ticket online from a company that was running a route from Tirana through Shkodër and Kotor, which suited my needs… but figuring out where the bus might stop in Shkodër was quite the task. I asked at my inn, at a large hotel, at the tourist office, and even tried asking two taxi drivers, and I got a different answer from each person. I finally found a helpful review online that mentioned the pickup point, and also found a note on the bus company’s website with a photo that helped me narrow down the options. I made it to the correct block, but even with all that preparation, I was still on the wrong side of the street and had to quickly hoof it through traffic to get on board.

Since my bus was leaving very early in the morning, I was too early for the traditional croissant/milk/cranberry juice breakfast, but instead (and as a complete surprise) the house mother brought two whole plates of sandwich fixings so I could make myself a snack for the road. What a lovely person — and it was a good sandwich, too!

One thought on “Outside Tirana: Two More Stops in Northern Albania”