02 June, 2018: When I woke up I was slightly sore, but eager to start the day. It was beautiful and sunny and I had several hours to kill before my ride back to Shkodër, so I started off with a walk.

The river in Theth is that wonderful shade of glacial blue, and as cold as that implies: 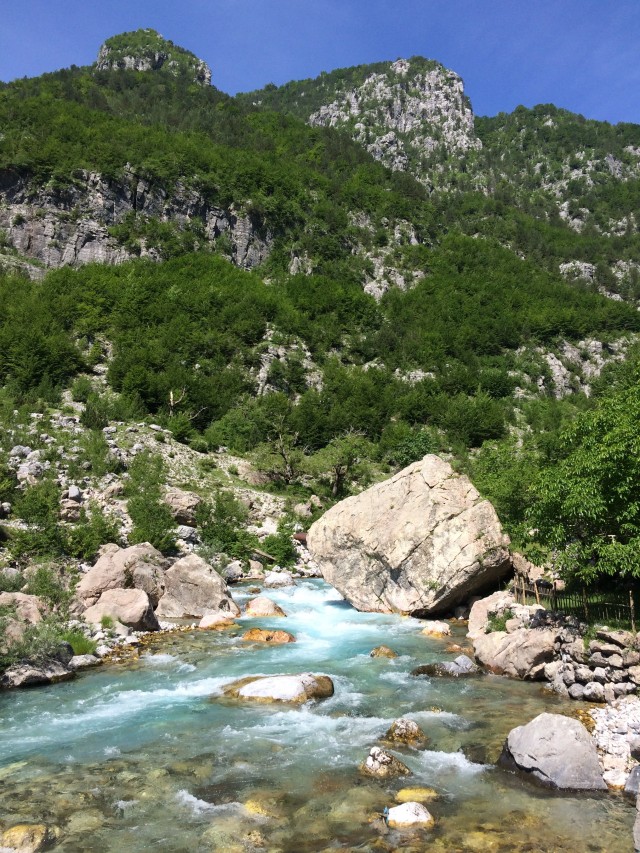 I found a footbridge but was not quite brave enough to cross it, so instead I walked along the river for a while and then dipped my feet in.

After that I continued on a circle through the valley, saying hello to a cow at one point, and at another encountering a group of horses grazing by the “main road”:

They weren’t interested in me, and after a few minutes they all picked up their heads as if they’d heard a secret, horse-only bell and stepped off briskly toward the village church, probably to join the flock of sheep for morning service:

The church was perfectly charming from all angles:

And the fields were full of wildflowers: 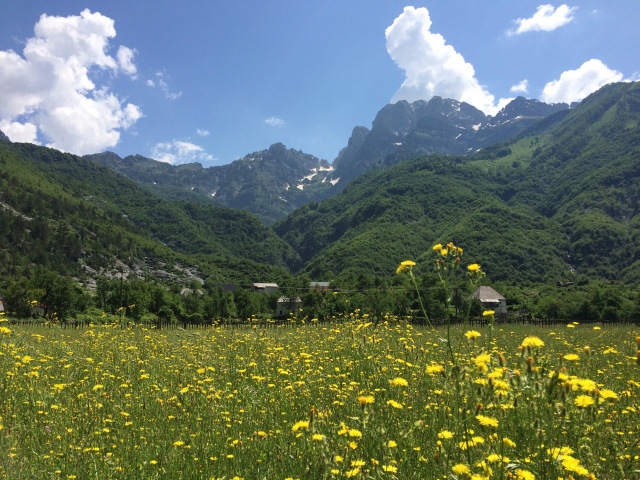 After my walk I had lunch at my guesthouse, then hopped in the front of a Land Rover with a cracked windshield and the Albanian crest emblazoned on the hood for the drive back to Shkodër. The driver was a wonderful 40- or 50-something Albanian man, who didn’t speak a word of English and drove with one hand while alternately smoking or talking on his cell phone with the other and keeping the radio cranked. We stopped to pick up a few other hikers along the way, tying baggage on the roof where necessary. 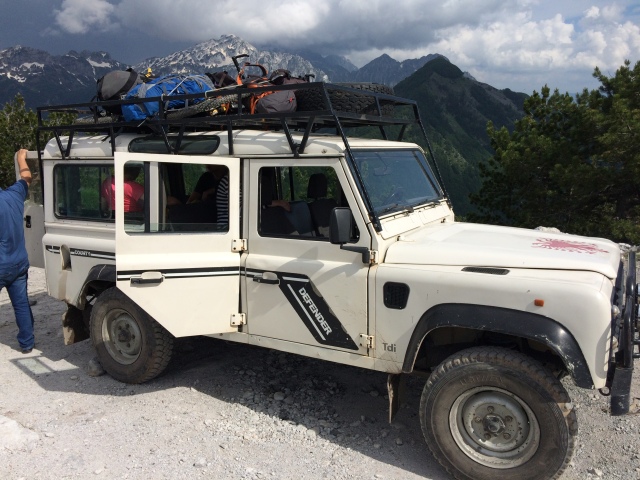 At the last stop (another guesthouse), the local residents came out laughing and brought the driver a beer for the road. He looked at it wistfully, then looked at his passengers, and somewhat mournfully offered it to the German hikers in the back, who were glad to take it. We then set off (through a river, naturally), and spent at least an hour driving on the most terrifying mountain track I’ve encountered yet. It was washed out in many places, with frequent sheer drops, and even the ‘good’ sections had more of those car-eating potholes to contend with. The driver was, of course, completely unconcerned, and I managed to keep my eyes open for most of the drive. We stopped for pictures at the pass:

And eventually hit a paved road and stopped at a cafe for a bathroom break. From there it wasn’t too long before we hit the outskirts of Shkodër, at which point the driver muttered to himself in a dire tone of voice, emphatically buckled his seatbelt for the first time, and drove with both hands the remainder of the way, grumbling something uncomplimentary about city drivers the whole time. By late afternoon I was back at my hotel, adventure complete!

I spent one last night in Shkodër, then set off early the next morning for Montenegro (fortified by a sandwich from the house-mother, who was appalled at the idea of sending me off without breakfast). Goodbye for now, Albania, I hope to see you again someday!