06 July, 2018: I mentioned two days trips from Lisbon; the first was to Sintra, and for the second (a week later), I went to the beach. I wasn’t quite well enough to go surfing, so I was aiming for a nice big beach, with a pleasant town or boardwalk to get my walking in, and lots of sand to stretch out on. I was hoping for a spot that wasn’t too crowded, but was in easy reach of the city center by public transit. I found all that and more in Costa da Caparica.

It’s described as the locals’ beach getaway — not too many tourists, mostly Portuguese families. To get there I took a ferry from Lisbon, then a bus from the ferry terminal, then walked from the bus stop. It was just enough public transit to weed out the less-adventurous tourists, and perfectly simple to accomplish with the help of Google Maps and Google Translate (how would I survive without Google?). On the way back, I took a different bus all the way into Lisbon, and then a bus home from there.

It’s a pretty resort town with a lengthy boardwalk along the oceanside, dotted with the usual beachside restaurants where drinks (in this case, water with mint and lime AND a milkshake because I couldn’t decide) are served with lids to keep out the blowing sand.

There are surfing spots on the northern beaches, and from the southern side of town an adorable tiny train runs along the beach, bringing you to other beaches with even fewer tourists:

I was pretty hot from walking in the sun, though, and was ready to just sit down on the beach where I was, so I didn’t take the train. Instead, after walking a good long way north before stopping for lunch, then an even longer way south, I wound up at a nice wide stretch of sand and spread out my towel. 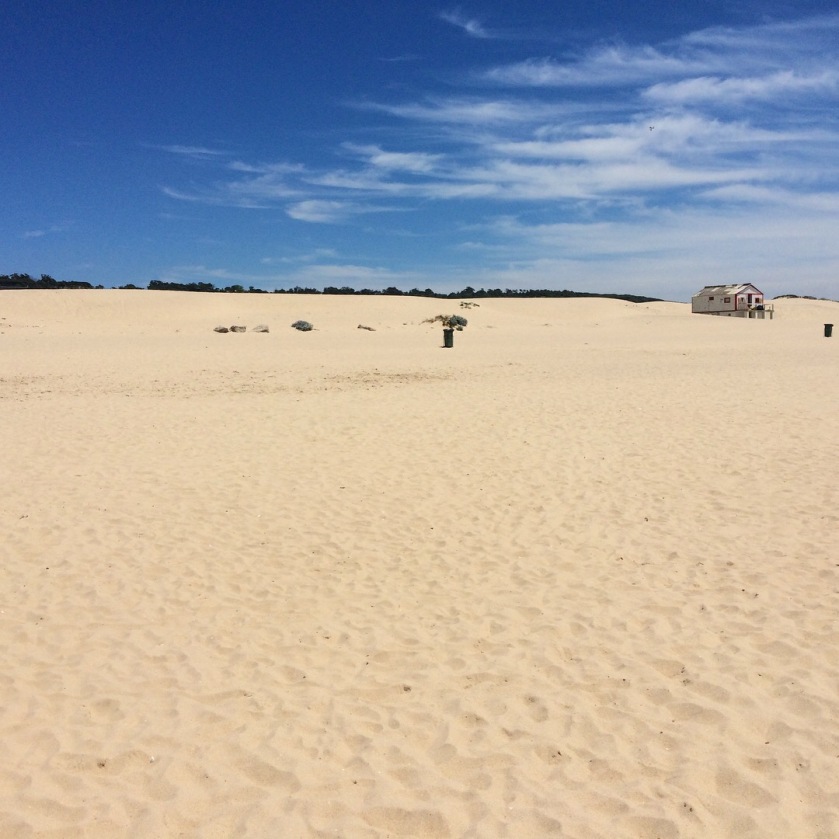 The one thing I wasn’t expecting was the tractors.

There are big tractors that roam this section of beach, waiting for fishing boats to come near shore. Then the tractor tows the boat up onto the beach, and the fisherman unload their catch in coolers. Locals from the town (both buyers from restaurants and normal citizens) pop down to the beach to buy their fish for the day literally right off the boats. Once the boat sells what it has, the tractor pushes it back out, and off they go on another round. 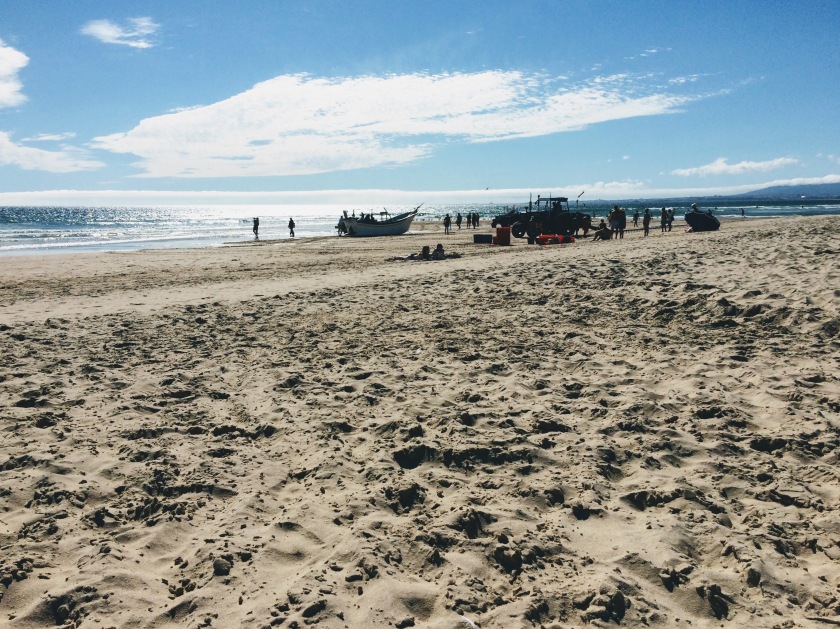 Aside from the noise and the extremely enthusiastic flock of seagulls attending the process (as a lot of the fish cleaning seems to happen on the beach too), it wasn’t a bother — the wind was blowing the fishing smells away from me, and it was interesting to watch.

The beaches in Portugal have really pretty thistles, that are a lovely lavender color:

And the sand is fine-grained and soft and stretches as far as you can see. The water is quite cold, but the surf shops rent wetsuits if needed. I wasn’t quite ready to attempt swimming yet, so I just spent a while sunbathing, then wandered back through the town to the bus stop.

It was a very enjoyable day at the beach, and a great way to spend one of my last days in Lisbon!