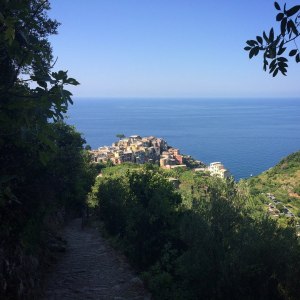 17 July, 2018: From Florence we hopped a bus to the train station, then a train to La Spezia, where we changed to a small local train to our next destination. Cinque Terre is a long-famous (it inspired Dante, among many others) tourist hotspot on the Italian Riviera; five extraordinarily picturesque villages set among steeply terraced vineyards on rocky hills along a very pretty coastline. It’s accessible almost exclusively by train (though some of the villages have ferries and there’s very limited road access). We stayed in the third of the five villages, right in the middle.

Corniglia is the best town in Cinque Terre, as far as I’m concerned. It’s marginally less crowded than the four villages, partly because it’s high on a hill (which also gives it a beautiful view). The hill does mean that you have to get yourself from the train station (which is near sea level) up to the town, which caused some daily angst… there is a regular shuttle from the train to the town, but it’s always packed and stiflingly hot in the bus. The alternative is to walk, which is a long haul up lots of stairs. Usually we walked, as it’s very pretty despite the climb.

On the plus side, one day while waiting for the shuttle, I met a lovely couple from Brooklyn who are the first and so far only people to correctly identify three of my four music tattoos! They were talking animatedly to each other for a few minutes while surreptitiously staring at my arm, and then one said, as politely as possible, “excuse me, but is that Beethoven?” My jaw nearly dropped — I get endless comments on my tattoos, but no one ever guesses the composers. I confirmed that it was, and asked them how they knew — turned out they’re both classically-trained musicians and composers. I excitedly invited them to guess the others, and they were thrilled to discover that I had more puzzles tattooed on me. We had a great time for the next ten minutes or so, and as I said, they guessed three out of four. We hoped to run into them again on the trip, but they were staying outside the town and leaving soon, so we weren’t able to meet up.

The elevation of Corniglia makes it a little tricky to reach the town, but it also makes it slightly easier to hike to the other towns on the upper trails, if that’s a thing you plan to do, since the other towns are at a lower elevation. You still have to go up a fair bit, to navigate the hills between the towns, but it’s more downhill overall.

On our first full day we woke up early to have breakfast on the terrace, which was included with the stay and was delicious.

Then we took the train to Monterosso, the northernmost town with the nicest beach. We rented sun chairs and lounged on the beach for a while, went swimming, explored the town, and had lunch before heading back in time for work.

The next day we hiked to the next town to the north, Vernazza. It was a beautiful walk that took a little under two hours, along a well-maintained rocky trail.

When we arrived we explored the town and its fort, and then went looking for a place to swim. 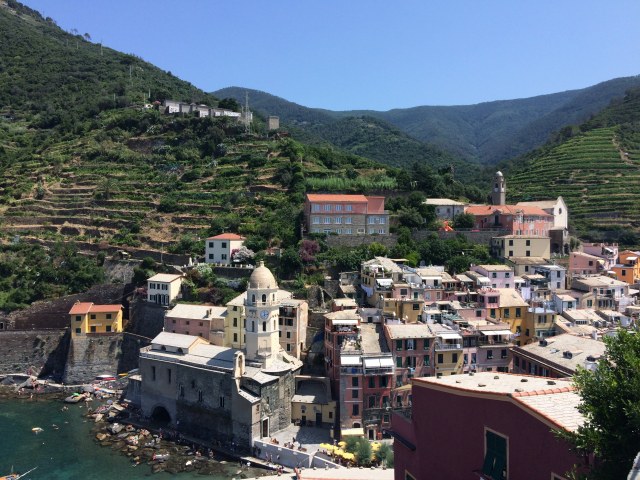 We had spotted a nice little secluded beach on the south side of the town from the trail, but we wandered around for quite a while without finding a way to access it. Finally we asked a nice local boy, who looked about 18 and was lounging in the most posed way possible against a stone wall, eyeing the passersby. He was friendly and oozing with charm, and seemed to be incapable of having a non-flirtatious conversation with either one of us. We nicknamed him “Winky McWinkyface” and laughed about it for the rest of the day. In any case, he pointed us to the beach access, which was via a tunnel through the rocks plastered with “NO TRESPASSING” signs, all of which were being completely ignored by locals and tourists alike.

The beach was great, with big stones suitable for sunbathing, excellent swimming, and some nice big rocks to jump off, including one that was steeply angled, perfectly smooth, and covered in a thin coating of seaweed that made it a perfect waterslide.

After the beach, we went looking for lunch, and found a great spot away from the water and the tourists. We had excellent pasta and tiramisu, and enjoyed the sign proclaiming

WE DO NOT SERVE EGGS!

We found similar (though less vehement) signs later in Milan, and learned that a good way to tell a touristy restaurant from a local one is whether or not the breakfast menu includes egg dishes.

After lunch we considered our options and decided the day was still young, so we took the train north, back to Monterosso, and rented a kayak. We spent a couple hours exploring the coastline and paddling into sea caves; it was great fun.

After concluding our time on the water, we caught the train back to Corniglia and walked around for a bit, exploring the winding narrow lanes in the old town. We watched a beautiful sunset, and went to bed early to get ready for another day of adventures! 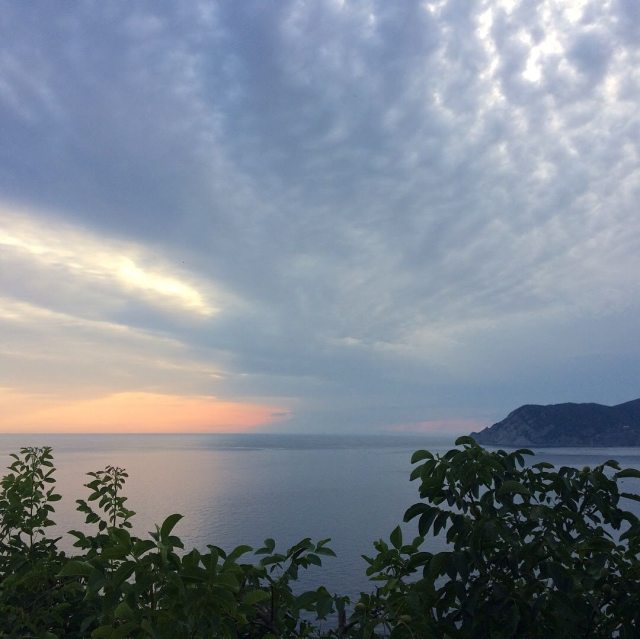 The next day was Sunday; we got up early and hiked south this time, to the smallest town in Cinque Terre: Manarola. We hiked through the vineyards, which are planted on steep stone terraces called ciàn that have been around for hundreds of years. The rugged nature of the landscape means that all the farming in this part of Liguria is done by hand — no tractors or farm machinery.

This hike was about the same length as the previous one, a little over an hour and a half, with plenty of stops for pictures. We walked down into the town and visited a fabulous restaurant on the hill overlooking the town and the sea. We had pasta and freshly-baked bread (some of the only decent bread we found on the trip), followed by amazing panna cotta and tiramisu.

Then we walked down into the town to explore a bit further. We wanted to visit a winery, particularly after walking through all the vineyards, so after some investigation we hopped on a local bus into the hills above the town. After about 15 minutes we stopped at a random switchback and walked another few minutes to the Cantina della Cooperativa Agricoltura delle Cinque Terre, a winery in the tiny village of Groppo.

At first we thought they were closed, as we were the only people in sight. After a few minutes, though, a lady came out to greet us, and in broken English assured us that we were welcome. She asked if we would like to tour the winery, which we hadn’t even considered as a possibility, so of course we said yes. We found a very modern operation making multiple kinds of local wine, but the highlight was a special building devoted to sciacchetrà.

Sciacchetrà is a sweet white wine made only in Cinque Terre. It’s meticulously hand-crafted; the grapes are harvested by hand and inspected for blemishes and quality. Only the best and sweetest (judged by their color) grapes are used. The grapes are then air-dried, protected from the sun by tarps, for about two months until they become yellow raisins, after which they’re pressed to make the wine. The wine is then fermented slowly for at least two years in small wooden barrels before serving. It’s strong and sweet, but not overwhelming, and really quite delicious with many layers to the flavor. It didn’t hurt that the first time I tried it was sitting outside surrounded by flowers and the vineyards it came from in Italy, but I’m sure I would have liked it anyway.

After enjoying our wine tasting (the other wines they make are also delicious) and picking up a bottle for later, we made our way back down to Manarola and caught the train home to Corniglia. We had dinner at a fabulous local restaurant, featuring fresh handmade pasta with a gorgonzola walnut sauce that’s common to the region and an appetizer board of local seafood, including fresh anchovies prepared in multiple ways. For dessert, I found what is so far my favorite gelato variety: basil topped with olive oil. It may sound odd, but it’s absolutely amazing and I want it all the time.

On our last full day we went to La Spezia, the nearest small city, in the morning to check out the sights there. We visited an archaeological museum in a fortress and wandered around a bit, then took the train back and stopped in Riomaggiore, the southernmost village in Cinque Terre and the one we had not yet seen. We had lunch there and walked around, then headed back to Corniglia to work and pack for our next adventure, as we had to start early the next morning for a long travel day to reach the mountains. 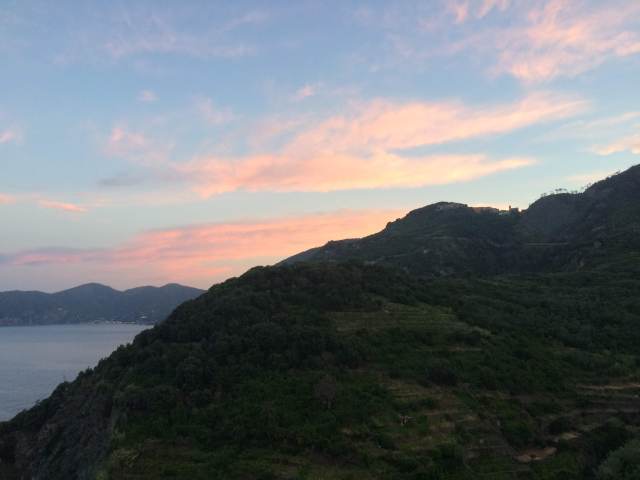 One thought on “Cinque Terre”