Franny and Zooey
See earlier posts for a description of the project…
I left Franny and Zooey with Kj at Deans Court library in St Andrews, Scotland, with a postcard from Paris. It was perfect, really, to leave it there — Kj is studying Theology, Imagination and the Arts, and I visited her partly for the purpose of attending a bunch of theatre together at the Edinburgh Fringe Festival. Franny and Zooey is heavily concerned with theatre, acting, imagination, ritual, and religion, so it was an absolutely perfect fit.
The book is in two parts, about the two youngest Glass children, who are in their early 20s at the time. Franny is lost and attempting a prayer mantra to find herself/God. Zooey is an actor, slightly older, and the most well-adjusted of the family, though that’s not really saying much. He’s trying to help her cope but is failing miserably.
It’s not my favorite of his books, but I think it reflects in the writing much of the repetitive, desperate searching that Franny is doing, with flashes of Zooey’s frustration and brief moments of transcendence/clarity/veil piercing. I’d say it’s successful because of that, but as an extended character study I don’t love it and I find it difficult to connect with either of them. Still definitely an important part of his work, just not my personal favorite. 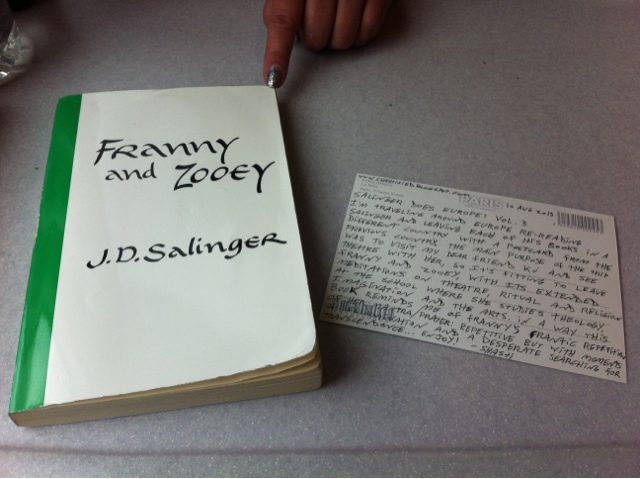 Nine Stories
As mentioned in a previous post, on this trip I’m re-reading the complete published works of J. D. Salinger, and leaving them behind, one in each of the four countries I visit, with a postcard from the previous country.
I left Nine Stories in Gare du Nord, one of the main train stations in Paris, with a postcard from Berlin. I did sort of abandon it while the station was being evacuated by the police and the French army due to a bomb scare, so I sincerely hope that it was found, and not ‘confiscated and destroyed.’
Nine Stories is my second favorite of Salinger’s books, and the second he published after Catcher in the Rye. It’s where he introduces, in snapshots and references, the Glass family that becomes his main subject… although I’ve always felt that Holden from Catcher in the Rye is close, sort of an early stab, perhaps a distant cousin or a former classmate to one of the Glass children.
My favorite story is For Esme, with Love and Squalor. I simultaneously love and am disturbed by the way Salinger depicts children throughout his work. They are always smarter and stronger and more honest and more complete and more ‘real’ than the adults… Part of what makes Holden in Catcher in the Rye such a despicable and unsympathetic character is the fact that we encounter him in the process of losing his childhood and becoming just the sort of person he so despises. He convinces us so completely of the awfulness of that sort of person, that we hate him nearly as much as he hates himself and so his self-loathing becomes complete through our own complicity. We’re unable to catch him and save him, just as he’s unable to catch the lost ones and fix his crumbling world. We’re sure at the end that he’ll be mostly alright, but it’s the ‘alright’ of someone who has lost something and forgotten what it was, so it’s deeply tragic.
Anyway, enough rambling about the last book. Nine Stories is great, and it continues the same sort of investigation of childhood/adulthood/innocence/jadedness/loss of self/self-loathing/etc and is fundamentally, like most of Salinger’s work, simultaneously tragic and incredibly hopeful. For Esme, with Love and Squalor is sort of a miniature summation of everything I love about his writing. Highly recommend. 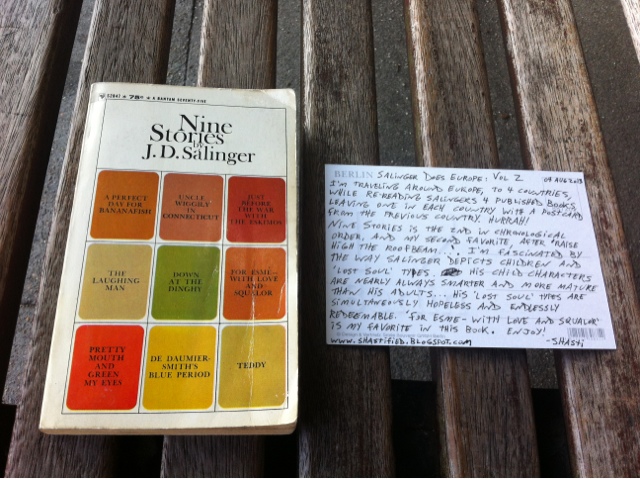 So I’ve got this project.

My reading material for this trip is the complete published works (minus a couple post-mortem releases) of J. D. Salinger. Here’s the plan: I’ll read them all again (there are four) and leave one in a public place in each of the four nations I visit, along with a postcard from the previously-visited nation featuring some notes from me.
Salinger is one of my favorite authors, and I really wanted to do some deeper repeated reading on this trip, as opposed to light vacation reading (though I did bring one of those for the long haul flights to/from Europe). This seemed perfect. It also means I get to progressively lighten my pack along the travel, to allow for those small acquisitions along the way.
Yesterday I abandoned Catcher in the Rye at a coffee shop in Prenzlauer Berg, with a postcard review from Oslo. Fun! Now I’m re-reading Nine Stories in preparation for London.
This was only the second time I’d read Catcher in the Rye. It was the first one of Salinger’s books that I ever read, and I HATED it the first time. It really put me off Salinger, to tell the truth. It wasn’t until much later when I read Raise High the Roofbeam, Carpenters/Seymour, an Introduction that I really fell in love with his work. Since then he’s become, as mentioned above, one of my very favorite authors. I’ve read all his stuff multiple times, but I never went back to Catcher in the Rye — I’d totally written it off.
I think it’s kind of a shame that that’s the one of his books everyone starts with, in school or whatever. I really don’t think it’s his best work. I will say, though, that upon second reading and with the benefit of knowledge of his other work, I really appreciated it this time in a different way… I’d put it on a continuum of three books that would make an amazing set:
•Something Wicked This Way Comes by Ray Bradbury (the absolute BEST capture of the world of an adolescent boy, hands down);
•Catcher in the Rye by Salinger (a truly flawless examination of the mind of a post-adolescent boy growing up through severe trauma and trying — and mostly failing — to cope);
•The Sound and the Fury by William Faulkner (a brilliant look through the eyes of a mentally disabled boy/man).
You could also make it a four-part set an stick Lord of the Flies on at the beginning, if you wanted… hurrah for reading! And for traveling!