After a hustle through the train station in London (though I did find time to stop for trifle at Marks and Spencer), I was on the train to Edinburgh. It was a pleasant ride, lots of sheep and coastline. I arrived in Edinburgh around 5pm, and went looking for my homestay. The directions I was given were fairly clear, however they assumed you would leave the station through the front door, and what fun would that be? Assuming one could find the front door…? Anyway, I asked a construction worker where I might find Leith Walk (mispronouncing it of course), and he replied with something I can only approximate: “Well darlin, ye joost goe oot thar, past th’ pasty shop, oop th’ stair, toorn t’ ye left, goe a wee bit more, an’ ye’ll find Leith Walk joost thar.”
WELCOME TO SCOTLAND!
Sooooo I’ve discovered that my obsession with British television didn’t prepare me for being fully surrounded by an assortment of British accents in London. Some British accents are lovely, and most are charming in small doses, but some are a little grating and when they’re all around you, it loses some of the charm.
But.
Scottish accents.
It’s just the opposite: on screen/stage they tend to set my teeth on edge a tiny bit… but in person? SO LOVELY! I could quite happily be surrounded by thick Scottish brogues all day every day. I had to warn my fella that if a gentleman in a kilt (possibly with bagpipes [which, holy shit, BAGPIPES EVERYWHERE]) referred to me as a ‘bonnie lass’ I might never come home.
Fortunately for everyone involved, this didn’t happen…
Anyway, I eventually found my homestay (the fact that Scottish streets curve frequently, change names at approximately every other intersection [and then sometimes, but not always, change back], and are very casual about posting street signs in the first place made it a tiny bit challenging). I was greeted by my absolutely lovely bohemian host, who was like your favorite young Scottish aunt, and who gave me lots of helpful advice along with her tour of the apartment. Our room (for me and Kj, who was joining me the next day) was lovely – a platform bed for me and a cozy mattress on the floor for her). The building was approximately a million years old, but perfectly lovely — the entrance stairs in the hall were so worn that walking up them felt like being on the deck of a ship in high seas (I’m not exaggerating and I truly doubt that I could have navigated them if I were even slightly tipsy). When I left it took me about ten minutes to work up the courage to attempt to open the main entry door, which had a latching mechanism I’d never seen before that was opened by pressing a giant red button that looked for all the world like it would instantly summon the fire department and/or police while making loud siren sounds; in fact it just made a tiny click and opened the door. I didn’t dare press it until I’d checked every other possibility, though.
I asked my host for a recommendation on a place to get ‘proper fish & chips’ as I’d missed that in London, and then set off to explore.
I went up and down the Royal Mile, which is thick with souvenir shops and even thicker, during the Fringe, with all manner of street performers (trending heavily toward the magician/circus act variety), piles of off-street performers handing out flyers for their shows, and a zillion tourists/audience members tootling about more or less aimlessly.
A note on roving audiences: Edinburgh has, simultaneously, an international book festival, the Edinburgh International Festival (classical music, straight theatre, etc — self-consciously highbrow), and the Edinburgh Fringe Festival, which is staggeringly enormous and encompasses every type of performing art (and is approx 50% stand-up comedy). So the massive crowds roaming around this not-so-massive city are… eclectic.
Then I sought out authentic fish & chips (“garden peas or mushy peas?” “ummm… garden?”). It was quite tasty, though definitely not something to eat every day. I ordered a side of bread & butter without thinking about it, though (and having freshly come from Paris…), and was surprised when it arrived — one slice of white sandwich bread with butter. Ha!
Then I went back and settled in to prepare for an early morning departure to visit and fetch Kj in St Andrews. 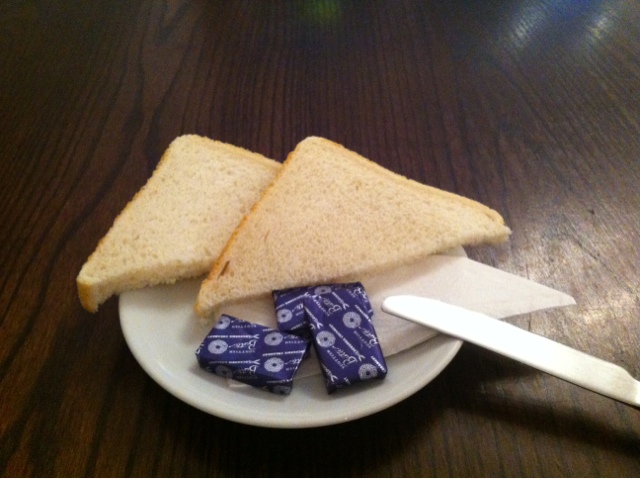