I got up super early to catch the train to St Andrews to meet Kj. I’m still not used to the simplicity/efficiency of train travel… I had asked my host the night before how early to arrive at the station: “is one hour early enough?” — she looked at me like I was crazy. “…five minutes is enough, maybe ten if you want to be certain…” “Oh.”
I got there 45 minutes early anyway, because it’s me, which meant that I had time to buy my ticket, find the pasty shop, buy a cheese & mushroom pasty (not the same as a pastRy!) that also contained, I think, potatoes and onions, and eat it in front of a bizarre monument that turned out to be for Sir Walter Scott.
Then I got on the train to Leuchars (a word that looks ugly on the page but is perfectly delightful when pronounced by a Scottish person) followed by a bus to St Andrews, where the lovely and wonderful Kj met me at the bus station. It was as if we’d just seen each other last week, as opposed to almost exactly a year ago… I think that’s the mark of a true friend: that you can see one another after an extended absence and pick up just where you left off.
She showed me all around St Andrews, which is a charming little hamlet (it might be slightly too large to be called a hamlet, but I’m going for it) with three streets: North Street, South Street, and Market Street. We saw some ruins, including a ruined cathedral; I went up a ruined church tower and looked all around; we went out to the pier and looked at the North Sea; explored the town; visited a surprisingly good little museum; played putt putt golf at the St Andrews course (I technically played golf at St Andrews! One of the first and most famous golf courses in the world!); and had dinner together in her ancient communal dining hall. Then we made our way to Edinburgh and settled in at our flat, to get ready to attack our Fringe experience. It was a beautiful day. 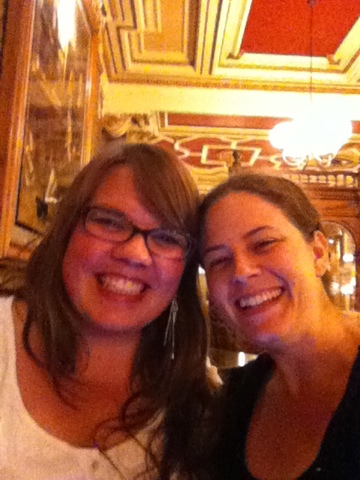 One thought on “St Andrews”