27 July, 2018: After the wine tasting, we drove through the mountains from Brixen to our next destination on the outskirts of a very remote farming village called Trichiana. Not only were we staying outside the already-remote village, but we also went back in time — Alex somehow managed to find a stone dairy cottage for rent, dating back to the 1700’s. It was on a working organic farm with the friendliest owner, who offered us fresh vegetables from his garden, and it was positively idyllic.

The cottage had been remodeled, so there were real windows, and indoor plumbing, and electricity, and a kitchen — but aside from that, it was pretty much as it would have been back in the 18th century. It was designed to store dairy and cure cheese, so it did a good job of keeping out the heat, which was great. It also got nice breezes with the windows open, which was surprising given the small size of the windows. We learned quickly that having the windows open was a bit dicey, though — we were, after all, living on an organic farm in Italy in the summer, and window screens haven’t caught on here yet. Can you say “insects”? It wasn’t so bad during the day, but we had to close the windows before dusk unless we wanted to be swamped with mosquitoes.

The sunsets in the area were amazing, though: 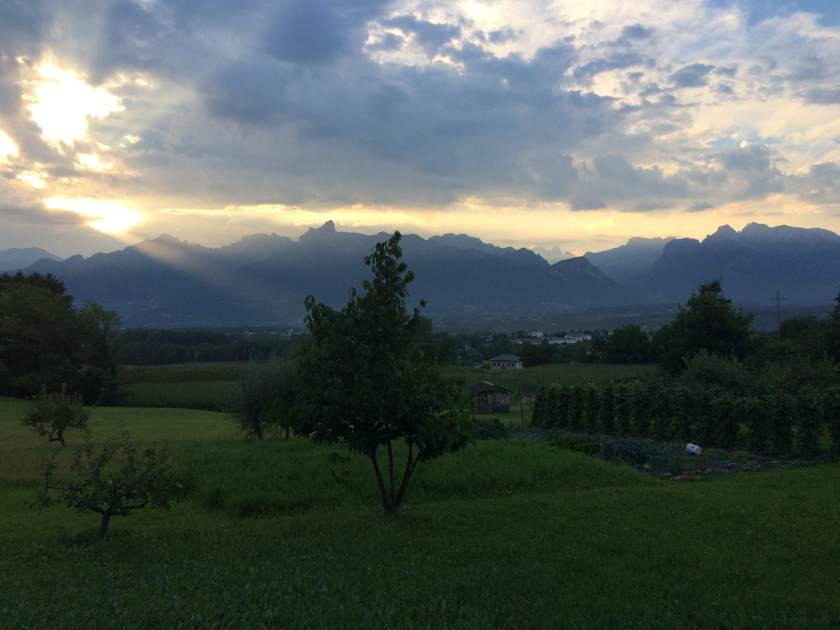 And the sunsets weren’t the only exciting thing that happened in the sky while we were there; there was also a blood moon eclipse, and we drove on a pitch-black mountain road through the most incredible pass to see it. Before that, though, we discovered an incredible restaurant — I’d go so far as to say one of my favorite restaurants in the world. It’s called Osteria la Muda, and it’s in a tiny village right at the top of the mountain pass I mentioned. It’s family-owned and run, and the food is absolutely amazing. It’s also next to the most adorable little village church:

We went for lunch on our first full day, and when we arrived we couldn’t quite tell if they were open — it’s a huge old stone farm house. We tentatively walked in to the front area and stood around for a minute, until a man came out of the back and saw us. “Are you open?” we asked. “The door is open!” he replied. “If the door is open, we will cook for you.”

Anyway, the food… for lunch, we had something that involved poached eggs, foraged mushrooms, truffle oil, and (if memory serves) a potato patty of some sort. It was SO GOOD, and that was just the starter! We then had two kinds of gnocchi, one with mushrooms and one with ragu, which were also fantastic, and two kinds of local white wine that were both incredible. Then we had dessert, which for me meant the most perfect strawberry custard tart I’ve ever tasted, while Alex had some sort of layered custard/preserves/crumble that was also delicious. The atmosphere was lovely, too — there was one other table seated for lunch, so we had the place mostly to ourselves. It has a huge open stone fireplace in the middle of the room, and just the right amount of cozy decor. Finally, when we finished our meal, they brought us a tiny bottle of complimentary homemade grappa and two glasses. It was strong, but good, and so sweet of them. 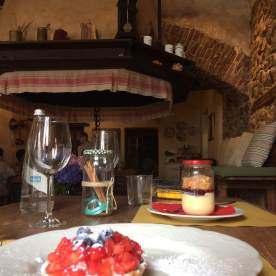 After lunch we decided to have a quiet day, so we went for a drive to a river we had spotted on the way in the day before, and spent the afternoon lounging on the riverbank, skipping stones, and admiring some incredible cloudscapes: 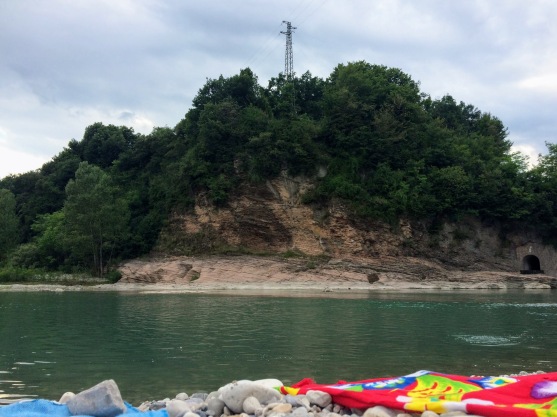 Then we went back and cooked dinner with fresh produce from our host and some fresh pasta from a grocery in the village, and got ready for another hike the next day.

The following morning we got a fairly early start, and hiked to an astonishing lake (separate post to come!). After the hike, we got cleaned up and went back to the same amazing restaurant for dinner. We had variations on the same thing and it was just as good if not better — and for dinner, the place was packed! Luckily we had made dinner reservations when we finished lunch the day before, so we had a good table (the same one, in fact).

After dinner it was almost time for the blood moon eclipse, so we decided to drive in the direction of the moon until we found a good spot to watch it. I had absolutely no idea what we were about to find.

After driving maybe 100 yards along the (narrow, rural) road toward the moon, we came around a curve and found a stop light, which was red. It was completely incongruous — there was no intersection, no houses nearby, just a curve ahead and this red light. It stayed red for a loooong time, and I was starting to wonder if it was broken, or if the road was closed, or what… and I definitely considered ignoring it and driving on. I’m very, very glad I didn’t, though.

Eventually a car came around the curve toward us and passed us, and after it did, the light turned green. I still didn’t put things together, though… I just drove on, and rounded the curve…

…and immediately found myself on an extremely narrow single-track road, leading steeply down into a tunnel in the rock. Which contained a hairpin curve. In the rock. When we rounded that 180-degree turn curve, we came out of the rock and onto a short straight part which led directly into another tunnel in the rock with another hairpin curve. At this point, we started to notice the signs, which were numbered. Each curve is numbered, and the numbers were going up — but we had no idea how many numbers there might be. And to add to the excitement, we were nearly out of gas.

I knew there was a gas station in the village behind us, but I had no idea how far one might be ahead — and as we wound down and down the mountain, I started to worry about whether or not we’d have enough gas to get back up — but priorities: if we turned back, we’d miss the eclipse! I took most of the 18 hairpin turns coasting, to save fuel, which made it a little extra fun.

Eventually we found a place to pull off the road while still fairly high on the mountain, with a great dark-sky view of the moon, and watched the eclipse. Then we considered whether we should try to get back up the mountain to the gas station I knew about (which was not close by), or continue coasting downhill and take our chances. I decided to forge ahead, on the assumption that this mountain road was probably leading somewhere more populated eventually, and luckily it paid off — we reached a main road and a gas station just in time. Then we circled back on the main road to our home village, and called it a night, quite tired out from our adventures.

Before I went to sleep, though, I did a bit of research to figure out what on earth I’d just stumbled across, and why this crazy mountain road exists. It was really interesting! Passo San Boldo is also called the “road of 100 days” because it was built in just three months during WWI, by the Austro-Hungarian army as a supply route. The builders were a mix of local people from the villages and prisoners of war, and included men, women, children, and the elderly. Over 1,400 people worked around the clock to complete the road and the tunnels. The hairpin turns and tunnels were necessary because of the kinds of heavy vehicles and artillery that needed transportation — the height difference of the pass combined with the challenging terrain meant that these switchbacks were the only way to keep the grade at a level that the army vehicles could manage. It’s an impressive feat of engineering, and a lot of fun to drive — though I might recommend doing it during the day, and with a little advance information about what you’re getting into!