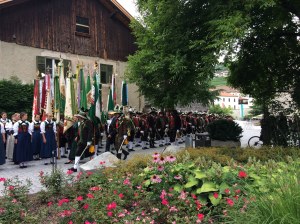 25 July, 2018: We attended three surprise festivals in two days in Brixen, and wrapped up our stay there with a wine tasting. First I found a flyer in the Brixen tourist office advertising a wine festival with live music in the nearby village of St. Magdalena on July 20, so we decided to check it out. It was probably related to the feast day of their patron saint, Mary Magdalene, though that’s normally on July 22; it also seemed to be a celebration of the first tapping of the wine casks, or something like that. In any case, this festival in the tiny village (~370 inhabitants) featured live music (in the general polka vein), wine from their famous local cellar, steins of beer, and lots and lots of German-style fair food. It was amazing. 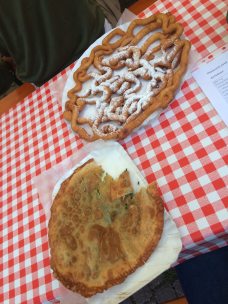 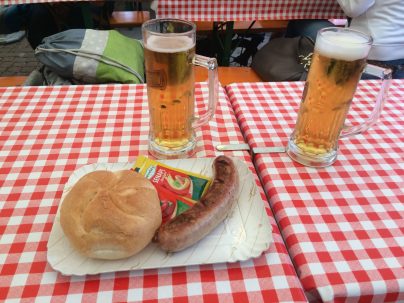 Tirtlen (fried dough with spinach) and funnel cake; sausage and beer: what’s not to like?

The next day we made our way to a nearby monastery, intending to check out their wines and explore the grounds. The winery was closed, but we accidentally stumbled into the middle of another festival, instead. This one was sort of a heritage festival and featured large numbers of villagers assembled into groups with different traditional costumes, who took turns doing various military exercises and then wrapped it up with a parade. 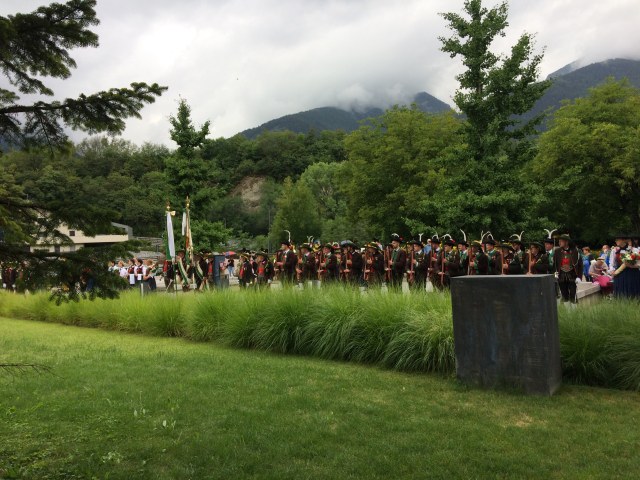 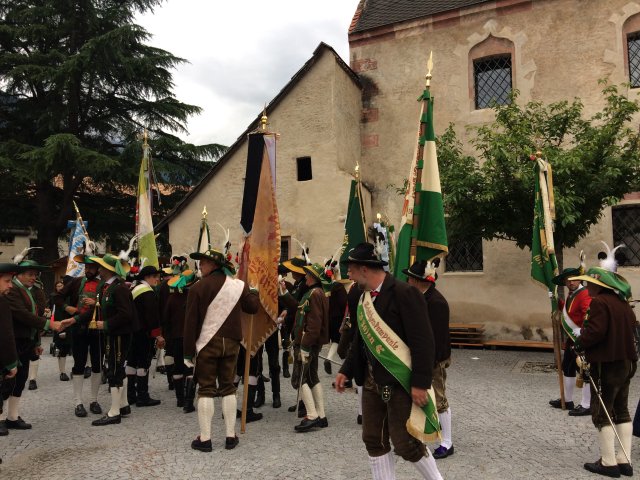 After that there was live music and dancing, along with lots of beer, wine, and more of that excellent German fair food. 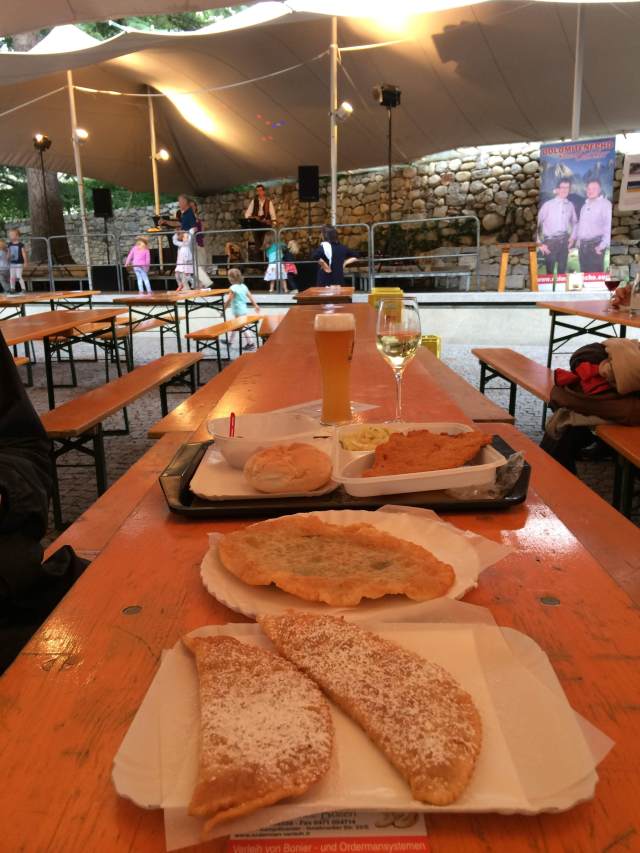 Beer and wine, schnitzel, potato salad, sausage (out of view in the bowl) and bread in the back; tirtlen (more of that fried dough filled with spinach; it’s so so good) in the middle; and some sort of fried dough with apple filling and powdered sugar in the front. Also note the band and a bunch of small children dancing in the background.

Later that evening we drove to a remote fortress in the mountains for the LoveElectro EDM (electronic dance music) festival, based on another flyer I had picked up in the tourist office. This one featured two stages, light shows and lasers, and terrible mixed drinks. It was great fun! It rained almost the whole time, but part of the grounds were sheltered and it kept the crowd cool. We danced for a few hours to a really good DJ from California and a few less-impressive DJs from elsewhere (including one that spent pretty much his entire set turning down the music and yelling at the crowd to put their hands in the air), and then headed home. 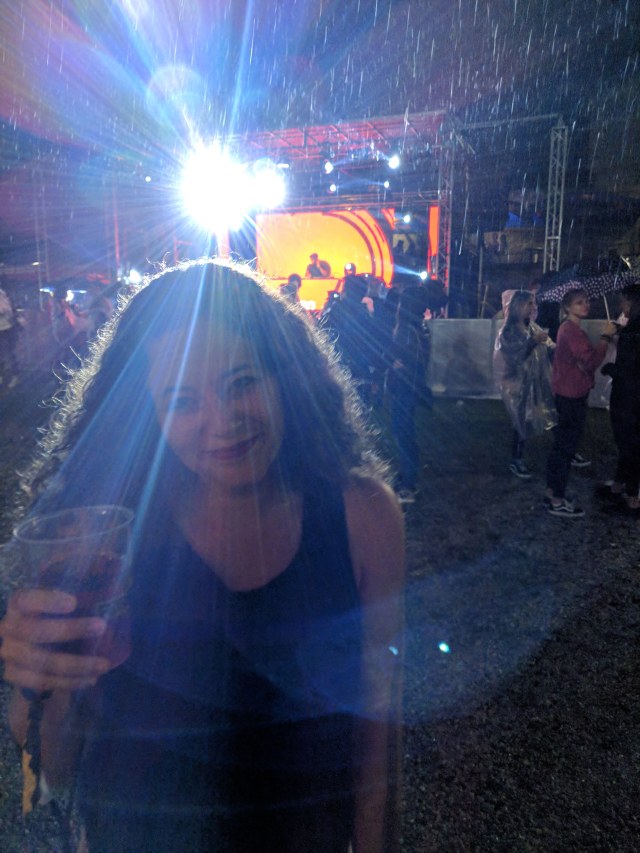 After a few more days of hiking and exploring the area, it was time to leave Brixen — but before we did, we were determined to try some of the wine from that local monastery. Neustift is an Augustinian monastery founded in 1142. It has a beautiful baroque church, and is an active monastery producing various things including excellent wine, herbal teas, and honey. This time we got there in the late morning, so the winery was still open, and there was no festival in sight. We were able to explore the grounds and the vineyards for a bit, peek through the gate into the gorgeous church, and then settled in to try their wines. 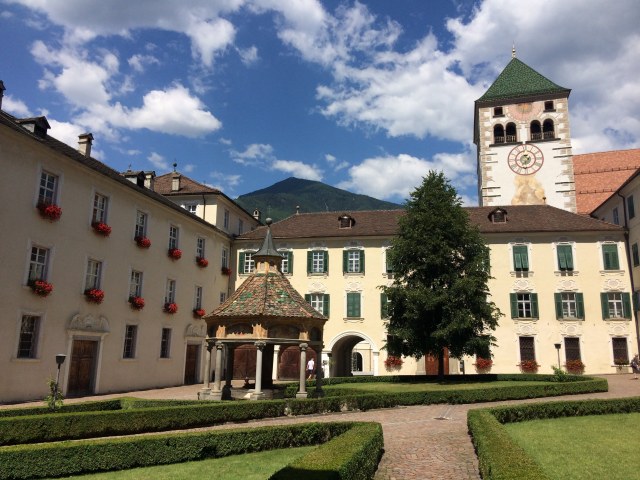 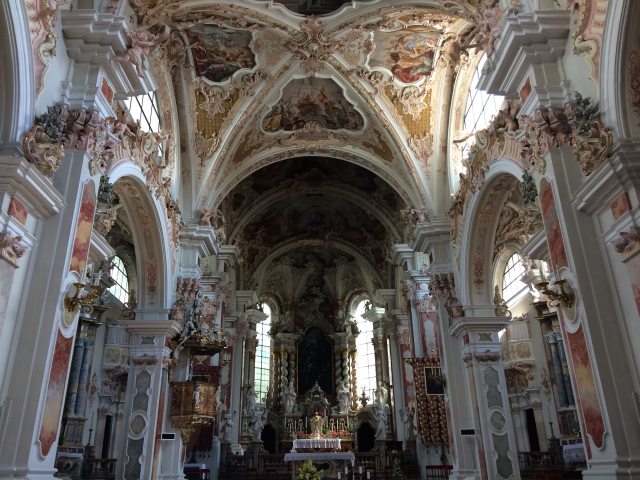 After a few sips each of most of the wines they make (all the whites, several of the reds, and both of the dessert wines), we had to wander around the grounds for a while and have some snacks before driving was a good idea. Eventually, though, we were ready to get back on the road, and travel onward to our next location!