September, 2018: Kyiv! This was one of my favorite cities, in large part due to the architecture.

I described it upon arrival as “rainbow sherbet with floofy bits” and I stand by that assessment, at least for many of the buildings.

Later research shows that the ones I was describing were mostly those built in the Ukrainian Baroque style, which is similar to Western European Baroque but a bit simpler, with less intense ornamentation, and elements in common with Constructivism which followed later on. It may be a bit less fanciful than Baroque in the west, but it’s still colorful and beautifully decorative, particularly some of the churches and monasteries. St Michael’s is one often-cited example: 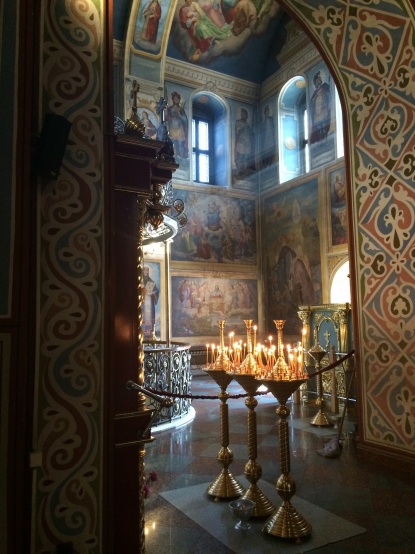 But I think St Andrew’s is the prettiest. It was closed inside for renovations when I visited, but I paid a couple dollars for admission to the terrace and spent a lovely half hour or so reading on a bench with a pretty view over the city. 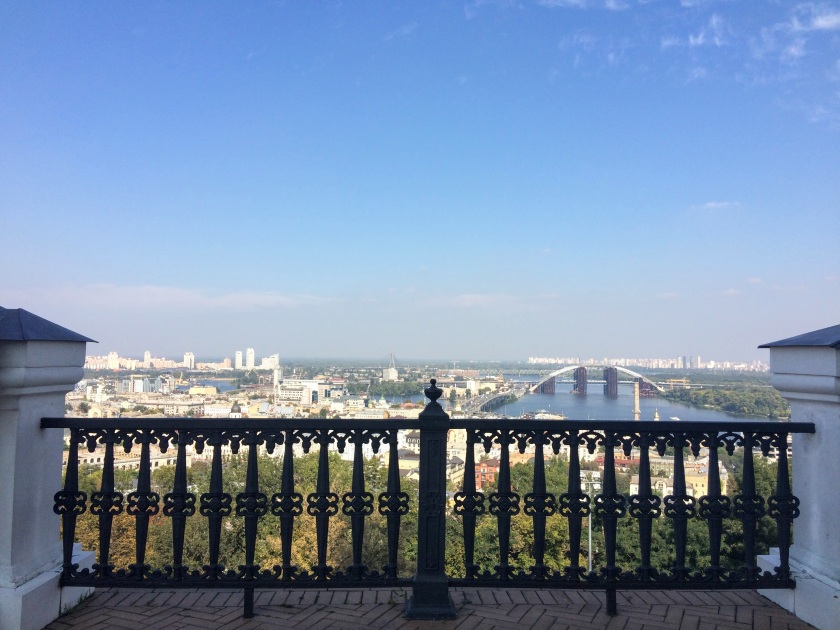 Kiev Pechersk Lavra, or the Monastery of the Caves, is another nice example — though it was built over many years and so the different buildings have a wide range of architectural styles. 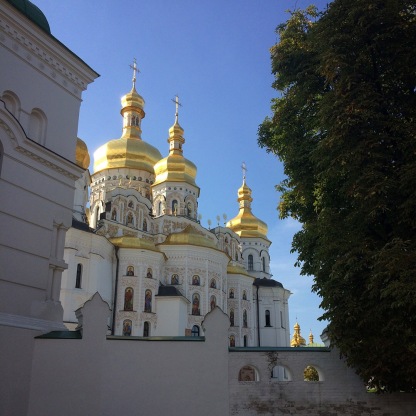 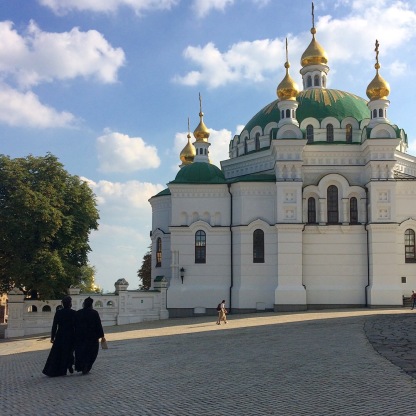 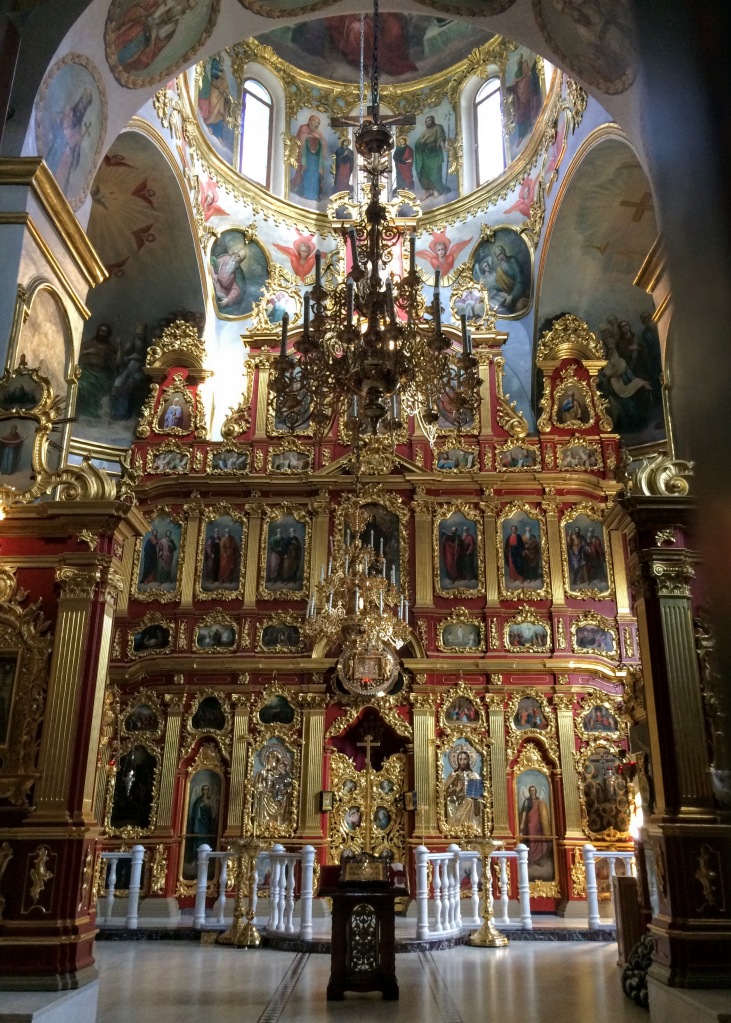 What about those caves, though? That refers to the catacombs underneath the monastery, which are full of elaborately-bedecked mummies. I bought a ticket and a candle to light my way, and borrowed a wrap-skirt to put over top of my scandalously jeans-clad woman-legs (I had brought a sarong to cover my head but was unaware of the rules about skirts for women… Women’s Lib hasn’t quite made it to the Eastern Orthodox church, it seems). Then I ventured forth into the tight, winding passageways underground. It’s cool and dark, because the only lights are beeswax candles tucked into holders here and there. The mummies are small and mostly covered in ornate brocade, though a withered hand pokes out here and there… I didn’t take photos because it seemed disrespectful. I also stumbled across a service taking place in a tiny side chapel, with lots of chanting; it was lovely but too crowded for me to stay. I paid my respects to the dead lining the walls of the catacombs, and returned to the sunshine outside. 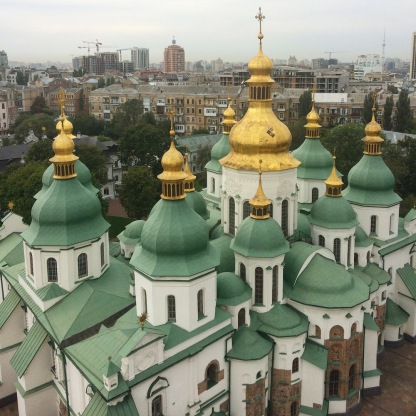 Which happens to be home to one of the more terrifying bell towers I’ve ascended — it looks so normal from the outside, until you realize it’s hollow and you’ll be winding your way up a scaffold staircase in the corner for most of the way up:

Later I visited St Volodymyr’s, and accidentally crashed a Ukrainian wedding. I wasn’t aware of the cathedral — I was just out for a walk — but when I spotted its colorful domes I just had to see it. I walked around and then went inside, and was able to observe a traditional wedding (the church seemed to be still open the public, so I covered my head and slipped in the back). It was very nice and ceremonial, with lots of chanting and ritualistic gestures, including a slow parade three times around the altar. The majority of the guests were dressed fairly normally or traditionally, but the maid of honor was in a slinky leopard-print dress and the other bridesmaids were doing their best to keep up…. makeup and hair are taken very seriously in Ukraine, and especially so for a special occasion.

The churches and monasteries in Kyiv are truly incredible. But the regular buildings are pretty great too! For example, tucked behind the bright yellow St. Volodymyr’s is this lime-green delight:

The area around St Andrew’s is full of gorgeous buildings: 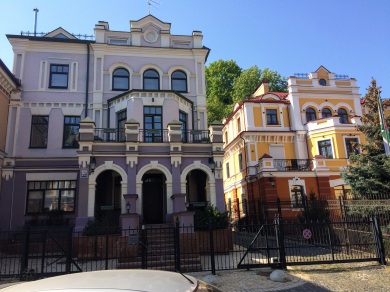 There were gems like these in my neighborhood, as well as the one at the top of this post:

And even the less-colorful and more imposing Stalinist buildings are amazing:

I love the decor on even the “simple” residential buildings. This archway was in my building, and housed my favorite coffee shop: 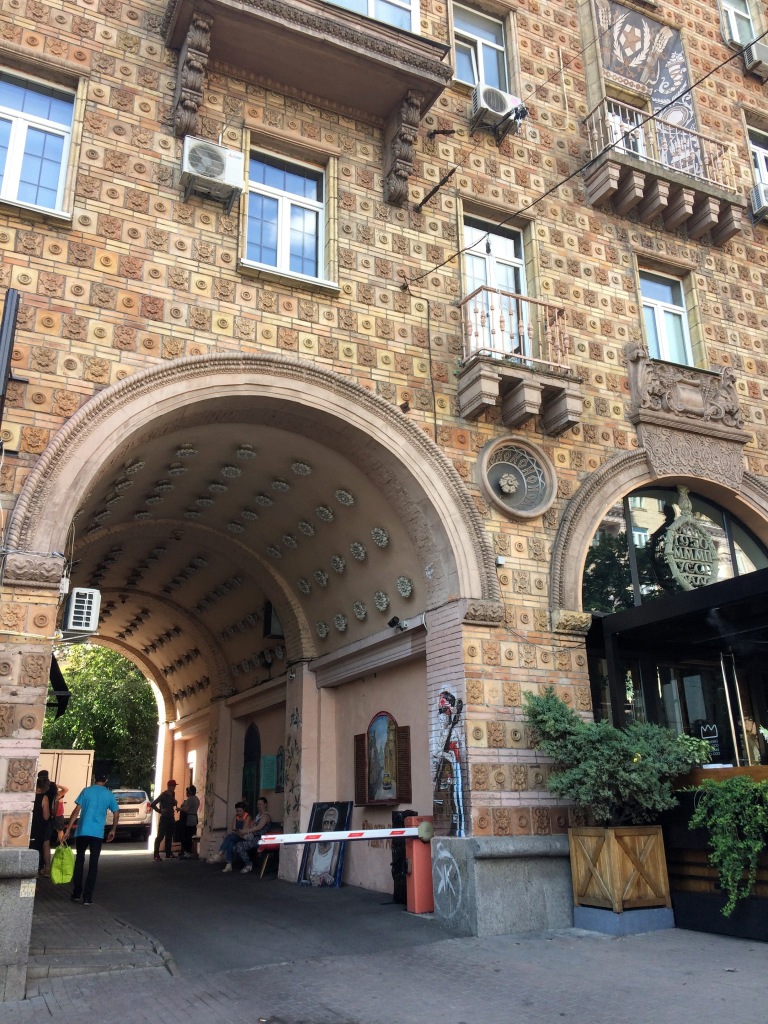 Kyiv’s buildings are even beautiful at night:

And all this is without even mentioning the incredible murals that cover well over 100 buildings in Kyiv. I love this city!