I really want to watch The Darjeeling Limited again. I’m listening to to soundtrack now, on my way to the airport, and it’s making me supremely happy. I can never decide how I feel about Wes Anderson; I think we don’t quite see eye to eye, but I can never get his films out of my head.

I’m leaving Berlin now, moving on to a late-night arrival in London. I’m surprised (and made a bit uncomfortable) by how much I’m looking forward to being in an English-speaking country again. It’s fun to be somewhere where you can’t understand most of what’s said and written, but it’s also a little bit exhausting in a way. Like, in that “I’m exhausted and hot and thirsty and I really just need to buy some toothpaste, I wonder if this is toothpaste or not…” kind of way. That said, it is quite fun to shop for essentials in a foreign land (something Rick Steves often suggests, and rightly so).
Public transit in Berlin is the best I’ve yet encountered. The system is incredibly well-organized and intelligently interconnected, and everything runs CONSTANTLY. I haven’t been on a packed subway or bus yet, and I’ve ridden during peak hours. I’ve also never had to wait more than 10 minutes for a train (usually more like 2-4 minutes). The signage is fairly good, though occasionally a little bit more of it would be helpful. And although the subway mostly shuts down for a few hours around 1am, when it does a nighttime bus network takes over, so you can still get wherever you need or want to go. SO GREAT. I can’t wait to live in a city with intelligent mass transit someday… I love Seattle but it truly fails in a massive way on that front.
So this is my first time flying on an intra-Europe ‘low-fare’ airline. Schönefeld airport is… TURRIBLE. It’s small and dirty and ugly and it smells funny. I didn’t know this going in — I thought it was a ‘real’ airport — so I arrived waaaaaay too early, to make sure I had enough time to find my gate. You see, I flew in via Tegel airport, which is old and smallish, so I assumed Schönefeld must be the big one to serve a big city like Berlin. Nope! I got here too early to be allowed through security, in fact, so I had to sit in teeny-tiny pre-security for an hour and then move to slightly-bigger-but-still-unpleasant post-security. There was a duty-free shop on that side, at least. I’m reminded that this airport is old and in East Berlin and it looks like it. Anyway, soon I’ll be in London, hurrah 🙂
Update: I’m riding my first ‘budget’ airline. It’s weird — the seats are hard plastic, the safety card is glued to the seat in front of you because there’s no seat pocket, there are no assigned seats so you have to fight for it if you don’t want to sit in the middle seat, and it all feels very off-brand. It’s like the Greyhound Bus of airplanes…
I don’t mind the lack of luxury, but it occurs to me that of all the things to save money on, maybe airplane travel isn’t the best one. That’s the last of these flights I’ve booked though, I think — it’s all trains and buses and ‘real’ airlines from here. Whoop whoop!
Last thing: I got up waaaaaay early today. See this picture? This is the Brandenburg Gate. On a Saturday. In the summertime. Note how there aren’t any people…. because it’s RIDICULOUSLY EARLY IN THE MORNING. Oy. 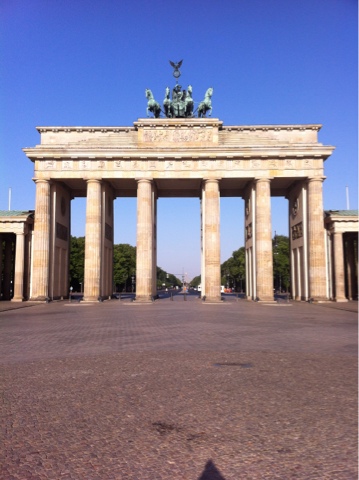