So after a draining afternoon at Sachsenhausen, I needed art. I went to the Neue Nationalgalerie, which is having a show on modern art from 1945-1968, specifically centered around the East/West divide in Berlin. It’s a good exhibit.
Side note: I’m writing this while eating Döner in East Berlin (thanks to Michael!), and it’s amazing. Imagine super thinly-sliced gyro meat, with every possible delicious fixing, but NOT on a pita. Instead it’s on fantastic Turkish bread and it’s a fucking revelation within the genre. I need this to exist in Seattle, please.
Anyway, art! I had one of the most lovely artistic experiences of my life today. It was so simple but such a great confirmation of the Healing Power of Art and blah blah blah.
If you know me, you know that I have no interest in ‘pretty’ art. You want to make something beautiful? Knock yourself out. But unless it moves me, or tells me something, or changes the way I think or feel, or just stops me dead in my tracks, I’m not going to care. I like my art with lots of meaning and layers and intellectualism and intelligence and talent, but also don’t be too full of yourself or too self-referential, you egotistic bastard.
Of course, any rule I arbitrarily make about my own aesthetics I break every time I enter a museum/gallery/whatever…
“I hate landscapes” hello, El Greco’s View of Toldeo.
“I hate portraits” but two of my very favorite pieces at the Frye are a portrait of this little black-haired girl with the saddest eyes you ever saw, and another portrait of an artist’s family with so much personality and sparkle they look absolutely alive without looking especially lifelike.
“I absolutely fucking hate Picasso” but MoMA in NYC has this early pre-cubist work of a boy and a horse that I totally dig.
“I hate Impressionism” just kidding, Monet is amazing.
Anyway, enough on relative aesthetics. Draining afternoon, concentration camp, needed art. Went to modern art museum. Saw a whole bunch of art, some good, some really good, some meh, but almost all about war, and the aftermath of war, and the fear of war, or a reaction against war. So it was great but not exactly a huge change of subject from the earlier part of the day. I was feeling pretty worn down, and of course I hadn’t eaten much, and I’d been in the sun a lot, and I was thirsty, and my attention was not as full as I like it to be for art. Then I was walking down a hallway, and there was a little side entrance to what would typically be a video installation room, with an angled entrance to keep the light and sound mostly out. I saw a plaque titling it ‘Light Room, I heard a little bit of faint baroque-ish harpsichord music, and I ducked in.
Now, I don’t know if I came in at the beginning. It was on a continuous loop, so there’s no way to know. I decided later that it was the beginning, but that could have been just because that’s when it started for me. I kept wondering where the artist had started it…
Anyway, it was quite dark, and it took my eyes a few seconds to adjust. I was the only person in the room. Just inside the door to my right was a big (3.5′?) cube, slightly raised off the floor, square to the wall and about three feet away from it, super-reflective, covered with regularly-spaced holes, and with a moving light of some sort inside. It was making all these light patterns dance around the walls, sort of like a disco ball only more interesting. There were a few other shadowy shapes in the room, which I started to see as my eyes adjusted and I carefully walked in, trying not to trip over anything. Just then, one of the shadowy shapes in the middle of the room lit up too. It was a very similar cube only about 1/3 smaller and set at a diagonal to the first. They both danced together for a minute while the harpsichord music continued, and then a little baby cube off to the side, with a different pattern, lit up too. They were beautifully choreographed and did some trading, and some duets, and finally a big trio… and then it went dark. Then this big old hulking black thing in the corner (NOT a cube) came on, revved up, and did a little light show of it’s own. Then the first cube joined in, and the big black thing went dark, and we were back to where I came in.
It was… enchanting. It wasn’t particularly deep or meaningful or layered, it wasn’t really making some big social commentary (unless you really felt like talking yourself into it, which yeah, I went to art school so we could discuss the various implications for hours if you really wanted to), it wasn’t intellectually challenging… but it made me so. Damn. Happy.
I must have sat there for a good fifteen minutes. Then I decided to explore the rest of the museum (saw a Joseph Beuys performance piece I’d never seen before called Eurasian Rod I think, pretty good, also lots of other things). After I finished, though, I went back and sat in that little room of light for another 30-40 minutes, just watching that dance. And I felt SO GOOD afterward. Thanks, Otto Piene!
Then I went to Friedrichshain and had a pretzel and döner in East Berlin, which, whoa, it’s like a totally different world over there on that side of the former wall. More on that later, maybe. Also more art! 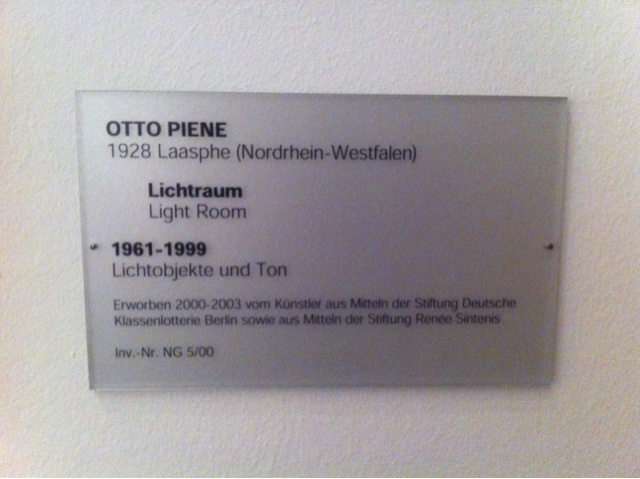 One thought on “Art!”