I want to mail a postcard but I don’t know what the mailboxes look like and I’m afraid I’ll throw it away by accident, because the trash bins are all colorful and inviting and there are other mysterious orange things that might be for trash, or postcards, or… anything, really.

This is my only real problem so far.
I feel very comfortable in Berlin. I keep forgetting I’m a stranger in a foreign land… and then I try to use my German and they laugh encouragingly and reply in English. “Umm… eine Mandelkuchen, bitte!” “hahaha… for here or to go?”
So I’m feeling slightly crestfallen re: linguistic skills. But I’m learning! I can understand some of what they say! Yaaaay 🙂
The newspaper boy throws the morning paper onto the private balcony outside my bedroom, so in the morning I bring it in to the hallway for my hosts. And yesterday evening one of them, Gunter, knocked on my door to say that he’d accidentally left the ironing board in my closet, and he was so sorry to bother me, but he had to iron a shirt for his husband for tomorrow. So I’m basically living in domestic bliss with a sweet gay couple and their adorable dog.
Now I’m heading out, with provisions, to spend a couple hours viewing a concentration camp, because history is important and also fascinating and in some cases super depressing. “Have fun at the concentration camp!” said nobody, ever.
Attention attention: the subway map is full of LIES. Got on the right train, but then it went the wrong way, so I thought it was the wrong train, so I got off, and went back a couple stations, and then it turns out it was the right train after all. This is where that unlimited transit pass comes in handy — all my mistakes are free now!
Also, the great thing about trains is that, if you fuck it up, you can pretty much always just get off and catch a train going back the other way. This also applies to freeways (usually, except for those rare pesky off-ramps with no matching opposite on-ramp) and ferries (as my mother and I discovered once after missing our ferry stop [I know, I know, how do you miss a ferry stop… well, you just sort of do, sometimes]).
Important note on riding trains in foreign countries where you don’t speak the language: make sure you’re in a car with some locals. That way if the conductor says something over the intercom, you can see what they do. If they ignore it, it was probably “Stand clear of the closing doors, please” but if they all jump up and run off the train suddenly, it was either “The train is on fire” or “This train is now suddenly a different train, please go catch that other train over there instead if you still want to go where you were planning to go when you got on”. In either case, this is an excellent example of a great time to play ‘lost lamb’ and follow the flock.
Another thing about subway maps: since they have to fit the entire system in a neat little square or rectangle, they are not necessarily to scale. In other words, that stop you’re headed to MIGHT be a big train station in Berlin, or it might be 45 minutes away and in an entirely separate village, as was the case today. So I basically just went to, I don’t know, Monroe, only this Monroe has a palace that was built in 1652 (see photo), which I looked at while I ate my packed lunch. It also has a concentration camp, where I will NOT eat lunch, because what kind of a monster do you think I am?!
Update: now I’ve been to a former concentration camp. I don’t really want to talk about it. Going there definitely helps put history in perspective, though, as far as scale etc.
Now I’m going back to Berlin and I feel a strong need for art, so I’m going to spend a few [blissfully air-conditioned] hours in the modern art museum. 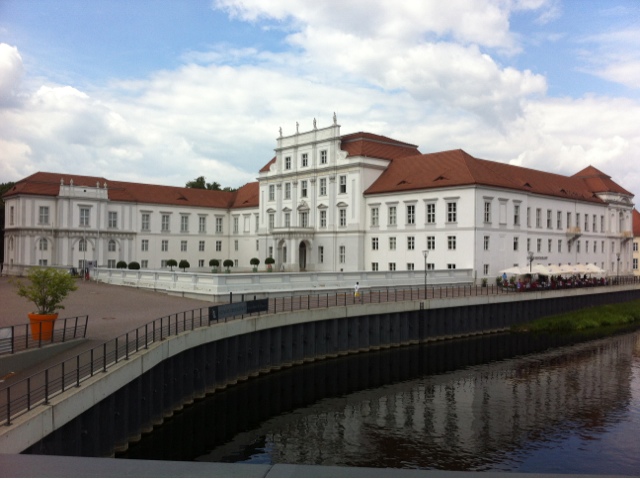